Size750mL Proof80 (40% ABV)
Aged in a combination of Oloroso and Bourbon casks, and finished for several months in port wine barrels. This unique secondary maturation process gives the whiskey a distinct flavor profile, ripe with fruit, nuts and spice. At the San Francisco World Spirits Competition, this Bushmills single malt received a Gold in 2012, and a Double Gold in 2013

Bushmills has recently changed its designs, and as the original labels are being phased out, there is still a chance that you might receive a bottle different than what is in the picture. Rest assured, the liquid remains the same, regardless of the design. 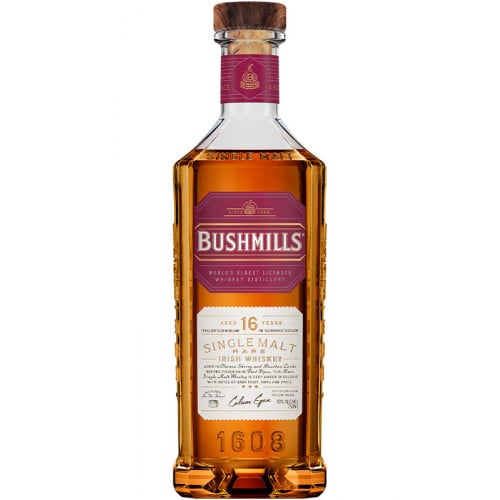 The United States was a very important market for Bushmills (as well as other Irish Whiskey producers) in the 20th century. In 1920 when Prohibition hit, the Irish Whiskey industry suffered a massive blow, that Bushmills resiliently managed to survive. This was largely due in part to Wilson Boyd — Bushmills’ director at the time — who (predicting the end of Prohibition) made the insightful decision to rack up large stores of whiskey ready to export. The distillery was purchased by Isaac Wolfson at the end of World War II. Then the Irish Whiskey industry dried to a trickle. Bushmills was one of only two distilleries in Ireland in 1972, until it was taken over by Irish Distillers. This gave Irish Distillers complete control of whiskey production in Ireland. In June 1988, Irish Distillers was bought by French liquor group Pernod Ricard, and then in June 2005, the distillery was bought by Diageo. Bushmills is now in the hands of Jose Cuervo, and celebrated its 400th anniversary in 2008.

Bushmills 16YO Single Malt is triple distilled, and aged for 16 years in a combination of Oloroso Sherry and Bourbon casks. The Irish whiskey is then finished in port wine barrels, for several months. This unique maturation process is what gives this single malt its distinct flavor profile, ripe with notes of fruits, nuts and spice. This beautiful whiskey received a Gold at the 2010 San Francisco World Spirits Competition, and a Double Gold in 2013.

On the nose are notes of spice, toffee, licorice, fruit, and vanilla. On the palate are nutty notes and flavors of malt, spice, vanilla, port, sherry, and fruit. The finish is clean, crisp and sherried.