Learn more
Size750mL Proof92 (46% ABV) *Please note that the ABV of this bottle may vary
Saint Kevin is the inspiration for this 7-year-old single malt. According to legend, Kevin lived in the wilderness for seven years before building his city of 7 churches. A 2016 Irish Whiskey Awards Gold medalist, and a Silver medalist of the 2016 San Francisco World Spirits competition. 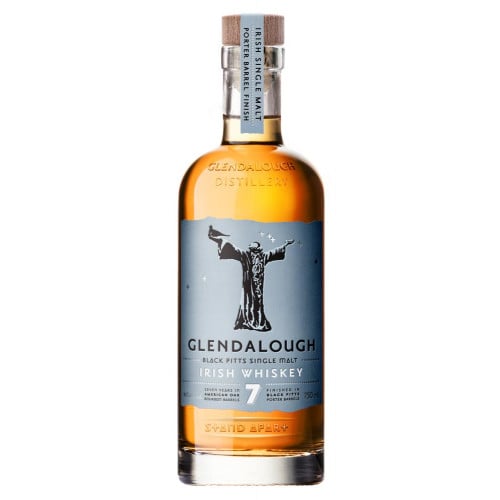 Glendalough is an idyllic little town in eastern Ireland. Gaelic for “valley of two lakes,” it was said to have been founded by a man named Saint Cóemgen—also known as Saint Kevin. The Glendalough Distillery, Ireland’s first new craft distillery, was set up by five friends from Wicklow and Dublin with a deep passion for reviving the heritage of craft distilling in Ireland.

Glendalough Distillery is part of a revival of this Irish heritage. Their philosophy is “to make innovative spirits while staying true to the tradition and heritage of our ancestors.” Glendalough started out making poitín - the traditional Irish distillate made in small pot stills. From there they seamlessly transitioned to whiskey production, and most recently, seasonal, wild botanical gins. All of their production is handmade.

Saint Kevin serves as the inspiration for their 7-year-old single malt. According to legend, Kevin lived in the wilderness for seven years before the building of his city of seven churches. This single malt is double distilled, and aged in first fill Bourbon barrels. Bottled at 46% ABV, it is rich and sweet on the nose, with a velvety smooth palate imbued with orange zest, creme brûlée, baking spices and oak, with a luxurious tangy finish.

Their bottle design pays tribute to the town of their namesake, and its roots. “Have a look on our bottle, you’ll see 7 silver crosses. These will lead you to each of the 7 churches, should you ever be stirred into going to Glendalough.”Glendalough’s 7YO is a 2016 Irish Whiskey Awards Gold medalist, and a Silver medalist of the 2016 San Francisco World Spirits Competition.

Pick up a bottle of this special Glendalough today!

The nose is rich and sweet, with a touch of cinnamon and citrus fruits - orange zest, lemon infused with vanilla ice cream. A touch of fresh floral notes.The Palate is silky velvety smooth with orange zest, rich creme brulee, dark chocolate notes, cinnamon and white pepper, malt, oak, and butterscotch. "The finish is luxurious and lingering, the spicy, sweet notes elegantly marry on the finish and stay an eternity." (Glendalough)