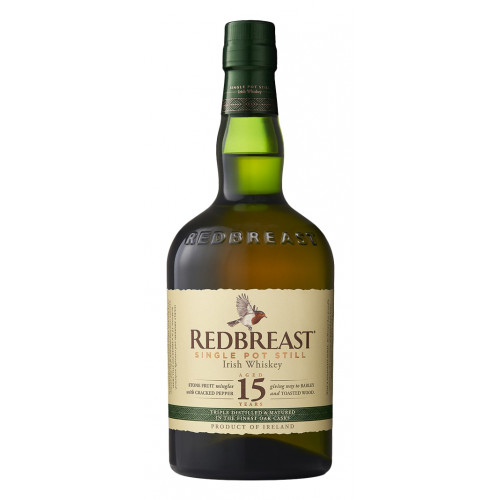 Today, Redbreast 15 Year Old Single Pot Still Irish Whiskey continues to pay homage to the legacy of Gilbey and its European origins. The whiskey is crafted from a marriage of malted and unmalted barley, which are milled and mashed before being triple-distilled through traditional copper-pot stills. The inclusions of unmalted barley in the whiskey's mashbill, along with the tradition of triple distillation, are uniquely Irish approaches to producing whiskey.

Following distillation, the whiskey is matured in a combination of casks that were previously used to mature Spanish Oloroso sherry and bourbon. After a 15-year slumber, the whiskey is bottled without the use of chill filtration.

Redbreast 15 Year Old Single Pot Still Irish Whiskey earned a score of 92 points from Whisky Advocate, which called it bold and masculine. In addition, it was called "Liquid Gold" by Jim Murray's Whisky Bible, and earned the Double Gold Medal at the San Francisco World Spirits Competition in 2013. Proof66 said that Redbreast 15 was "one of the most perfect whiskeys we've ever come across."

NOSE Full and rich with a complex yet balanced mix of berry fruits and aromatic oils.

TASTE Fully round and mellow with the succulence of fleshy fruit combined with spices and toasted wood.