Size750mL Proof93 (46.5% ABV)
Coming from the first Irish artisan distillery, this single malt marries first fill bourbon casks with Pedro Ximenez and Madeira casks.
Notify me when this product is back in stock. 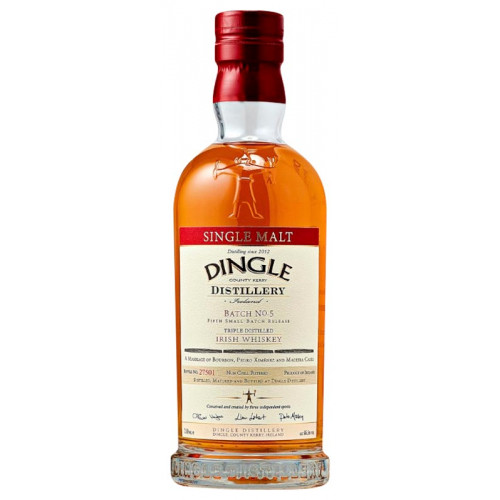 Two hundred years ago, there were over a hundred officially recognized distilleries in Ireland. Today there are less than ten. Founded as Ireland’s first artisan distillery by Oliver Hughes, Liam LaHart and Peter Mosley in 2012, Dingle Distillery takes its name from the town in which it is located, where tourists flock to visit Europe’s westernmost human settlement. An old sawmill was converted into a distillery, where Dingle marries Ireland’s tradition of independent distilling with innovative processes only feasible for small batch producers.

Dingle Single Malt Whiskey Batch No.5 Triple Distilled is a marriage of first fill bourbon casks with Pedro Ximenez and Madeira casks, which allow for the bourbon to bring forward its warm and spicy notes. Triple distilled, this Irish single malt whiskey features a beautiful profile of molten honeycomb flavors and salted caramel, with Pedro Ximenez and Madeira casks producing notes of sun-dried raisins, complemented by blossom honey and vanilla. Bottled at 93 proof, this is a wonderfully warm and lingering whiskey.

Warm, spicy nose. The palate is sweet with notes of sun-dried raisins, creamy blossom honey and vanilla. The finish is smooth and lingering.