This product is available in: CT, FL, NY, OK, TX Unfortunately, we can't ship to PO Boxes and APO addresses.

Size750mL Proof80 (40% ABV)
After spending at least 11 years in ex-sherry and ex-bourbon casks, this expression is finished in Marsala wine casks for 6 to 9 months, resulting in a soft, smooth, and nuanced dram.

This product is available in: CT, FL, NY, OK, TX Unfortunately, we can't ship to PO Boxes and APO addresses. 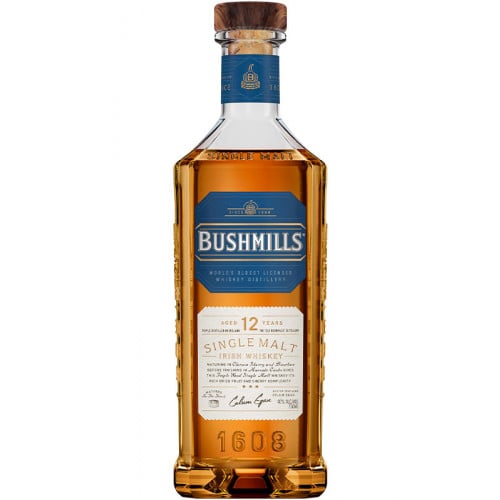 The history of Bushmills is a storied one, steeped in history. In 1608, King James I of England granted Sir Thomas Phillips — the governor of Bushmills, County Antrim in Northern Ireland — a license to distill on his territory. Even in those early years, before the Old Bushmills Distillery Company was officially established (Hugh Anderson did so in 1784, and registered the first-ever trademark for the pot still), historical accounts show that a great quantity of whiskey was produced there. And though several events — including a disastrous fire in 1885, as well as World War II — halted production at the Old Bushmills Distillery, the distillery determinedly fought on. Bushmills remains an icon in Irish Whiskey, its picturesque facilities a popular tourist destination.

The United States was a very important market for Bushmills (as well as other Irish Whiskey producers) in the 20th century. In 1920 when Prohibition hit, the Irish Whiskey industry suffered a massive blow that Bushmills managed to survive. This was due in part to Wilson Boyd — Bushmills’ director at the time — who (predicting the end of Prohibition) made the insightful decision to rack up large stores of whiskey, readying them for export.

The Bushmills 12 Year Old is a single malt whiskey that is triple distilled from 100% malted barley. After spending at least 11 years in ex-sherry and ex-bourbon casks, the expression is finished for 6 to 9 months in Marsala wine casks. The 3 types of casks combine into a wonderfully nuanced 40-proof expression with rich notes of dried fruit, sweet spice, and nuttiness. It's an approachable dram as well, with Bushmills' signature softness and sweetness.

Get your bottle of this 12-year-old Irish single malt today!

Rich aromas of dried fruit, spice, and candied apple greet the nose. The palate is creamy and sweet with honey, fruit, caramel, spice, and a nutty maltiness. The finish is drying with notes of warm ginger and pear lingering pleasantly.