Learn more
Size750mL Proof80 (40% ABV) *Please note that the ABV of this bottle may vary
Aged for a minimum of four years in ex-bourbon casks, this Irish whiskey won the Gold Medal at the 2014 International Craft Spirits Competition.
Notify me when this product is back in stock. 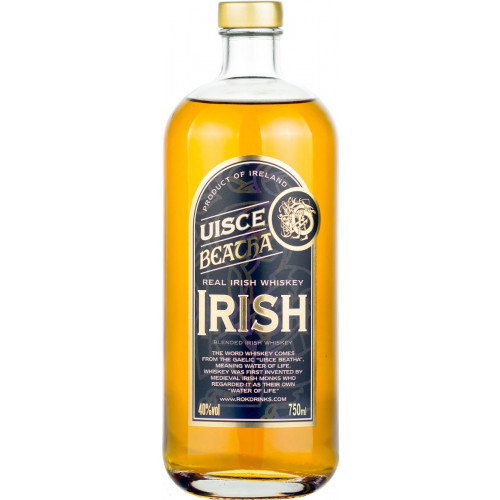 In the middle ages, Irish monks affectionately began calling distilled alcohol “uisce beatha”, literally, “the water of life”. Interestingly, more than 1,000 years later, the word “whiskey” itself is now simply an anglicized version of the Irish phrase “uisce beatha”, as those words are commonly mispronounced as “whiskey” in the English language.

Uisce Beatha Real Irish Whiskey, the brainchild of Patrón Tequila founder Jon Paul DeJoria, is a blend of single malt and grain whiskies, aged for a minimum of four years in ex-bourbon oak casks. As a result of this aging process, Uisce Beatha Real Irish Whiskey has an underlying nutty complexity, which leads to honey, baking spices and French toast on the nose. The body is filled with notes of clementines and graham crackers, and leads to a smooth, malty finish characterized by freshly cut barley.

Underlying nutty complexity, which leads to honey, baking spices and French toast on the nose. Body is filled with notes of clementines and graham crackers, and leads to a smooth, malty finish characterized by freshly cut barley.