Size750mL Proof92 (46%ABV)
A blend of 18-year-old single malt and 8-year-old single grain Irish whiskey, both originally aged in ex-bourbon casks, it's finished for 9 months in ex-Oloroso sherry casks.
Notify me when this product is back in stock. 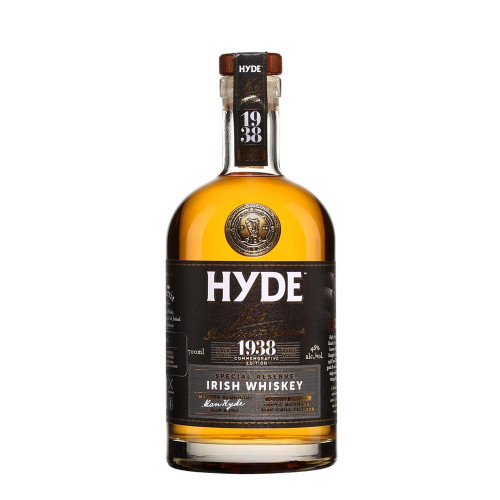 Founded in 2014 in Skibbereen, Ireland, by brothers Conor and Alan Hyde, Hibernia Distillers is a family-owned distillery with Hyde family's roots in the spirits business going back to 1640 when the Hyde's were well known bar owners. Today, Hyde Irish Whiskey is matured and finished in the idyllic County Cork on the Atlantic coast in south west Ireland, which provides the distillery with an ideal microclimate for whiskey-making that can't be found anywhere else in Ireland. Sourcing the finest Irish whiskey exclusively from the very best Irish whiskey distilleries, Hyde premium whiskey is then finished in vintage oak casks, sourced directly from distilleries around the world, and bottled in small, limited-edition batches.

Hyde No. 6 President's Reserve is a blend of 18-year-old single malt and 8-year-old single grain Irish whiskey, both originally aged in ex-bourbon casks. The two magnificent vintage expressions are then married and finished for 9 months in vintage ex-Oloroso sherry casks that hold 108 gallons. Bottled at 92 proof, this delightfully floral, smooth and complex Irish whiskey offers flavors of caramel, honey, apricot, and apple. The finish is rich and oaky, leaving behind a silky aftertaste.

A delightfully floral nose with vanilla, honey, caramel, and chocolate aromas. A silky smooth and complex palate with flavors of caramel, honey, apricot, and apple. The finish is rich, oaky, and long.