Size750mL Proof92 (46% ABV)
This single malt Irish whiskey was aged for 14-plus years in a combination of ex-bourbon casks and special sherry-infused casks made specifically for Knappogue Castle. 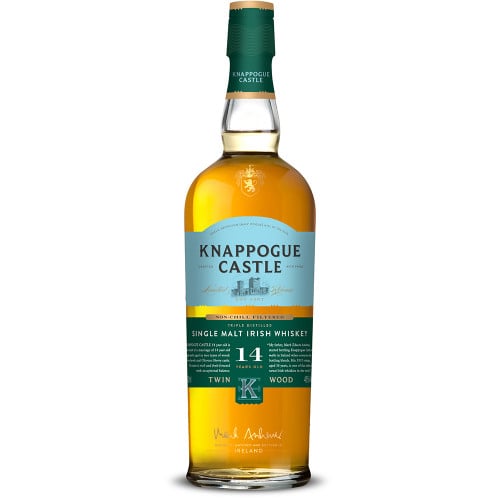 While Mrs. Andrews focused on the architectural details of the project, Mark Andrews began buying casks of the finest pot still Irish whiskey and bottling them under his own independent label, suitably named Knappogue Castle. Andrews was unusual in that he chose to bottle single malt Irish whiskies, as opposed to blends, which most others were choosing at the time. The last of Andrews’ selections, Knappogue Castle 1951, was distilled at the now-defunct B. Daly distillery, and since become the oldest and rarest publicly-available Irish whiskey in existence.

As a result of this meticulous aging process, Knappogue 14 Year Old Twin Wood Single Malt Irish Whiskey has a light, reddish gold color and an aroma of orchard fruits, sherry and and oak. The palate contains notes of plums and dried apricots, along with more bitter fruits such as green apples and grapefruits. The finish is malty and complex, with sweet vanilla notes melding beautifully with wine tannins and charred oak.

Light, reddish gold color and an aroma of orchard fruits, sherry and and oak. Palate contains notes of plums and dried apricots, along with more bitter fruits such as green apples and grapefruits. Finish is malty and complex, with sweet vanilla notes melding beautifully with wine tannins and charred oak.