This product is available in: CT, NY, TX Unfortunately, we can't ship to PO Boxes and APO addresses.

Size750mL Proof80 (40% ABV)
First launched in 2016 this single malt was matured American-white-oak Bourbon barrels, then finished in oloroso-sherry butts.
Notify me when this product is back in stock.

This product is available in: CT, NY, TX Unfortunately, we can't ship to PO Boxes and APO addresses. 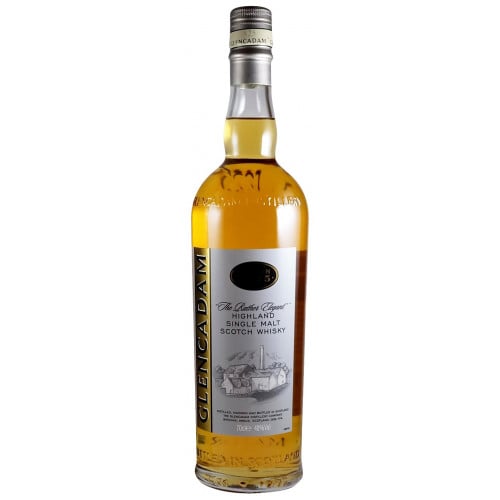 The name “Glencadam” is derived from the area known as “The Tenements of Caldhame.” These tenements were plots of land given to the burghs of Brechin for the purpose of food production. The Glencadam distillery is geographically surrounded by these plots, which are situated to the north and south east of the Den Burn.

In 1954 Glencadam was sold to Canadian distiller Hiram Walker, as a part of a large acquisition that took place in Scotland. Then distillery proceeded to become a part of Allied distillers, who mothballed the facility in 2000 and was purchased three short years later by Angus Dundee of London, who are also owners of the Tomintoul distillery in Speyside.

Glencadam single malts are quality Whiskies, no chill filtering or coloring additives are used. Sourcing water from the Barry Burn, the facility houses two stills with a capacity to produce 14,000 liters. Glencadam also sources unpeated industrial maltings for their single malts, and they age their Whisky in mostly ex-Bourbon American casks. The Whiskies are distilled using a technique that maximizes reflux. Upward sloped lyne arms on the stills impart a distinctly floral, pear-drop element to the Whisky.

Glencadam Whiskies also have other signature characteristics, like rich oily textures, and creamy flavors. The Glencandam range is a diverse lineup of Whiskies that include Portwood and Oloroso Sherry cask finishes.

Glencadam Origin 1825 is the first NAS (non age statement) Whisky to be released by Glencadam. Launched in 2016 this single malt was matured first in American-white-oak bourbon barrels, then finished in oloroso-sherry butts. This Highland spirit effervesces notes of fruit and flowers. It’s a smooth single malt, not overly complex, a perfecter starter Whisky for aspiring aficionados!

Creamy, floral malted barley with hints of vanilla and mixed summer fruits on the nose. The palate has flavors of bananas, pineapple, pears and boiled sweets that merge with a delicious mix of soft spice. The finish is floral with pear-drop sweetness.