Learn more
Size750mL Proof86 (43% ABV) *Please note that the ABV of this bottle may vary
This single malt spends at least 17 years in a combination of oak casks: American (sherry & bourbon) and ex-sherry Spanish oak casks, resulting in a complex, aromatic, and well-aged dram that's bottled at 86 proof.
Notify me when this product is back in stock. 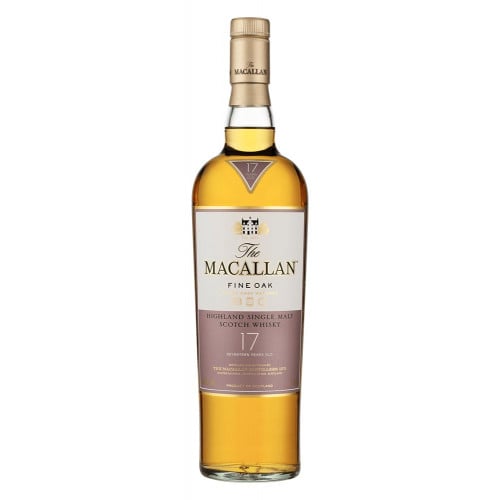 Introduced in 2004, The Macallan's Fine Oak series showcases the mastery of wood that the distillery is known for. The exceptional oak casks are sourced, toasted, and seasoned under the watchful eye of their Master of Wood to the exact standards and specifications of the Whisky Mastery Team. The Macallan Fine Oak spent its 17 years in a combination of 3 different cask types: sherry and bourbon American oak, and Spanish sherry casks. This makes for a complex, flavorful, and aromatic expression with exotic tropical fruit, jasmine, and citrus notes. This wonderfully mature single malt Scotch is bottled at 86 proof.

Get your bottle of this exceptional single malt today!

It's a light amber whisky with an exotic and aromatic nose of floral, jasmine, tropical fruit, and gentle peat notes. The palate is rich with citrus, spice, and wood smoke. The finish is long with a touch of orange.