Size750mL Proof92 (46% ABV)
The Smoky Twelve is a 12-year-old edition of Benriach’s peated Speyside single malt, matured for at least twelve years in three different types of casks. Third on the Top 20 Whiskies of 2020 list, this expression will satisfy both peat lovers and the peat-wary, according to Whisky Advocate
Notify me when this product is back in stock. 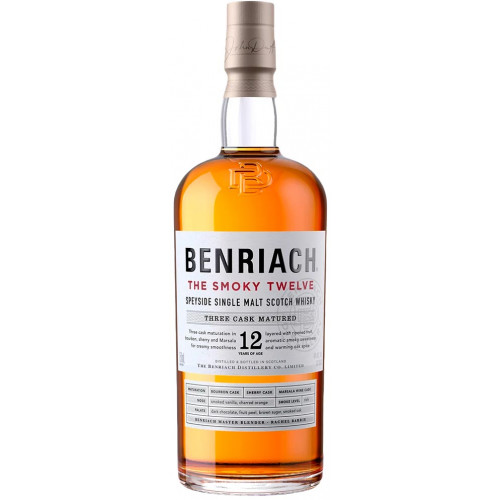 While distilling was stopped, Benriach continued producing floor maltings, supplying malted barley to their neighbor, Longmorn Distillery. It wasn't until 1965 when the distillery restarted the production of its own malt whisky, responding to the boom in the industry as a result of growing global demand for Scotch whisky. After changing several hands, Benriach is currently owned by Brown-Forman Corporation after the acquisition in 2016.

In the early 1970s, Benriach started to explore peated distillation, making some of its whisky in the old, 19th century style using malted barley smoked with Highland peat. Another milestone came in 1994, when the distillery, previously only making spirit for blends, launched its first ever single malt, a 10-year-old edition. Four years later, Benriach began making small batches of triple distilled spirit, adding the third style to its family of award-winning Speyside single malts, which now consists of classic unpeated, Highland peated and triple distilled whisky. All three styles of whisky are kept in the Warehouse 13, which is the oldest original dunnage warehouse from 1898, maturing in an eclectic range of casks, sourced from all over the world. Benriach’s warehouses hold an exceptional collection of single malts dating back to 1966.

The Smoky Twelve is a 12-year-old edition of Benriach’s peated Speyside single malt Scotch whisky, crafted from a combination of unpeated and peated spirit. The whisky is matured for at least twelve years in three different types of casks: bourbon barrels, sherry casks, and Marsala wine casks, and then expertly married together to create a smooth, creamy single malt.