Learn more
Size750mL Proof92 (46% ABV) *Please note that the ABV of this bottle may vary
Aged for a minimum of ten years, this gift set includes a decade-old whisky and two nosing glasses.
Notify me when this product is back in stock. 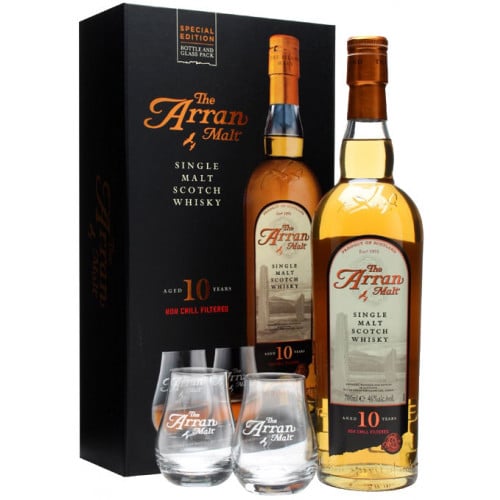 "The reason the distillery was built here," says James MacTaggart, the master distiller at Arran Distillery, "was because there was a very good water supply. In fact, it was tasted and it was decided that it was probably one of the best water supplies in Scotland for making whisky."

Arran 10 Year Old Single Malt Scotch Whisky represents the flagship whisky produced at Arran Distillery. The whisky is made from unpeated Scottish barley, which is malted and then fermented using a proprietary strain of yeast. Once the barley has been fermented, the wash is distilled twice — first through Arran's copper-pot wash still and then again through Arran's copper-pot spirit still. The stills were custom designed, says MacTaggart, and "shaped to allow the lighter vapors to come up through the stills." As a result, Arran Single Malt Scotch Whisky has an appreciably softer and more delicate flavor profile.

Following distillation, Arran 10 Year Old Single Malt Scotch Whisky is matured in ex-bourbon and ex-sherry casks for a minimum of ten years. "Selecting the right cask, knowing when that cask should be opened or left to mature for a little longer or adding a specific cask finish to enhance the flavor are gifts it takes generations to perfect," says MacTaggart. The bourbon casks contribute notes of cinnamon, oak and citrus to the whisky, and complement the notes of bananas, melons and milk chocolate provided for by the sherry casks. In addition, the Isle of Arran's unique microclimate — the Isle enjoys the warm Gulf Stream and cool, breezy summers — contributes a hint of salty tang to the whisky as it matures.

Once the whisky has matured for 10 years, the whisky is non-chill filtered and brought to proof using water sourced from Loch na Davie. The whisky has an aroma of creamy vanilla, sweet malt and tropical fruits. The aroma fades into notes of kiwi, bananas, coconuts and melons on the palate, which are well-complemented by undertones of cinnamon, cloves, chocolate and honey. The finish is slightly sweet, with hints of maple syrup and caramel.

Aroma of creamy vanilla, sweet malt and tropical fruits. Notes of kiwi, bananas, coconuts and melons on the palate, which are well-complemented by undertones of cinnamon, cloves and honey. Finish is slightly sweet, with hints of maple syrup and caramel.