Be the first to review this product
A strictly limited edition bottle from Glenmorangie and one to look out for.
$94.99
Add to Wish List

In 1738, a brewery was built upon Morangie Farm in the Highlands region of Scotland. A century later, William Matheson acquired the farm and equipped the Morangie brewery with two stills that he purchased second-hand, and renamed the brewery-converted-distillery Glenmorangie. Their Single Malt Scotch Whisky is made using malted barley, which is mashed and fermented with water sourced from the Tarlogie Spring. The water produced from the spring, which spends nearly a century underground being filtered through layers of limestone before it is extracted, is unusually rich in minerals.

After the barley has been fermented, the wash is twice distilled through Glenmorangie's copper-pot stills by a team of 16 distillers known as the Sixteen Men of Tain. Glenmorangie's stills are equipped with relatively small boiler pots, which increases the exposure of the whisky to the copper, resulting in a purer flavor. In addition, the stills are nearly seventeen feet tall — the tallest of any distillery in Scotland — and as a result, produce a lighter, more refined whisky.

The Cadboll was named after a 16th century silver cup, a family heirloom of the MacLeod family that one can find in the National Museum of Scotland. This particular version is a strictly limited edition, made from Glenmorangie's Cadboll Estate Barley. Contrary to previous releases it proudly touts its age. The Cadboll Estate 15YO whisky is matured in American oak ex-bourbon casks. It elevates the single malt further with added creaminess and an extra layer of depth brought on by the oak casks while keeping Glenmorangie's signature smoothness intact. 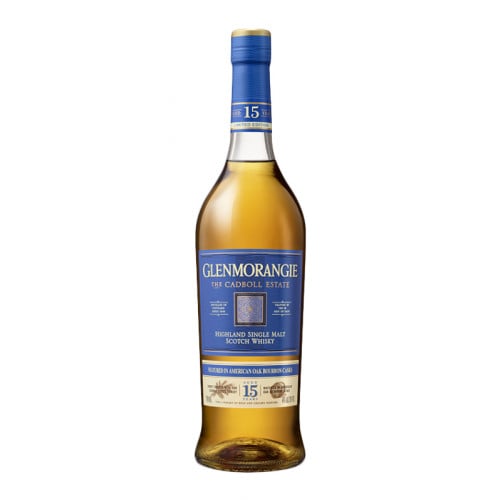