Size750mL Proof92 (46% ABV)
This whisky was recreated in the style of Gerston Distillery, a Highlands producer shuttered in the early 20th century and formerly celebrated throughout London, India and Brazil.
Notify me when this product is back in stock. 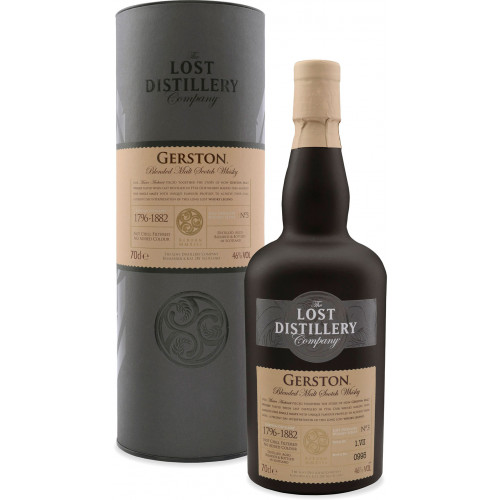 Over the past century, nearly one hundred malt whisky distilleries in Scotland have been permanently closed or destroyed. Most of these distilleries were lost as a result of macroglobal conditions, such as Prohibition, world wars or financial crises. As a result, many of the unique and venerable brands in the Scotch whisky industry were considered permanently lost — until now.

The Lost Distillery Gerston Malt Scotch Whisky is a recreation of a single malt whisky distilled at Gerston Distillery, which existed in two iterations — Gerston One (1796-1882), which was a small, family-sized operation that nonetheless gained customers throughout London, India and Brazil, and Gerston Two (1886-1914), which was more of an industrial scale operation with ten times the production capacity of Gerston One. While Gerston Two could never quite emulate the success of its predecessor — ultimately Gerston Two was demolished in in 1914 — the Gerston name will forever be remembered for its excellent quality and early popularity in the style of lightly peated, malted barley now synonymous with the Highlands region in Scotland.

Once the malt whiskies used to recreate each of these single malts have been married together, they are prepared for bottling. "While our ten key components are critical in determining the flavor profile of a whisky we recreate," says Moss, "it's just as important to recognize what wasn't in the whisky. A century ago, there was no such thing as chill filtration or caramel colouring of the final product. That's why we don't do either of these things today."

As a result of this recreation process, The Lost Distillery Gerston Malt Scotch Whisky has notes of bitter orange, fresh linens and toffee on the nose, and a palate marked by cereal grains, roasted nuts, raisins and licorice. The finish is powerful with notes of peat, seaweed and sweet butter candy.

Notes of bitter orange, fresh linens and toffee on the nose, and a palate marked by cereal grains, roasted nuts, raisins and licorice. Finish is powerful with notes of peat, seaweed and sweet butter candy.