Size750mL Proof92.4 (46.2% ABV)
Named after a local Islay beach, this is the second batch of the permanent expression that is released in limited batches every year. This 19-year-old Ardbeg has spent 19 years in bourbon and sherry casks.
Notify me when this product is back in stock. 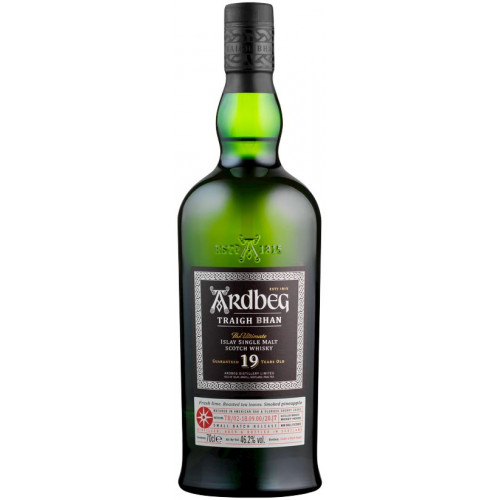 The Traigh Bhan (pronounced "tri-van") is named after a local beach and translates to "the Singing Sands". Each year's release has subtle changes in its batch recipe, as well as minor changes in the selection of casks. This is the second release in the series where more first-fill than refill bourbon casks were used, while the level of sherry casks remains roughly the same. Sweet smoke is balanced with savory, brine, medicinal, and spice notes. It has spent 19 years in American oak and oloroso sherry casks.

The distinct signature sweet wood smoke leads the charge on the nose, along with crème fraîche, fennel, celeriac, roasted tea leaves, and brine. Savory notes intensify on the palate and are joined by medicinal notes, as well as aniseed, fudge, lime, and more peat smoke. Finishes satisfyingly long, savory, and smoky.