Learn more
Size750mL Proof86 (43% ABV) *Please note that the ABV of this bottle may vary
Aged for a minimum of 21 years, this limited release whisky earned a score of 91 points from Whisky Advocate.
Notify me when this product is back in stock.

This product is available in: DC, MI, NV Unfortunately, we can't ship to PO Boxes and APO addresses. 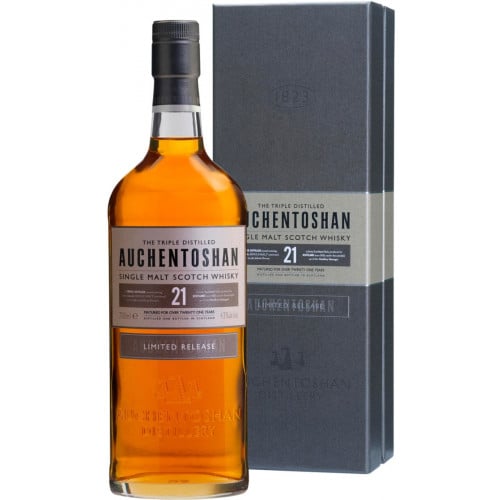 Auchentoshan 21 Year Old Limited Release Single Malt Scotch Whisky is matured in a combination of ex-bourbon casks and ex-Spanish sherry casks for a minimum of 21 years. The limited-edition Scotch has an aroma of ripe berries, creamy vanilla, oak, honey and mint. The aroma gives way to notes of sweet milk chocolate, honeyed oak, green apples and nutty dough, and leads to a long, elegant finish. The whisky earned a score of 91 points from Whisky Advocate, and was named F. Paul Pacult's "top choice" as the quintessential Lowland Single Malt.