Size750mL Proof109.2 (54.6% ABV)
Distilled at the Glendullan Distillery in the whisky capital of the world, this cask-strength 19-year-old single malt was matured in refill American oak casks and finished in cognac casks. Bottled at 109.2 proof, it's a rich and elegant whisky that was distilled, matured, and bottled in Scotland.
Notify me when this product is back in stock. 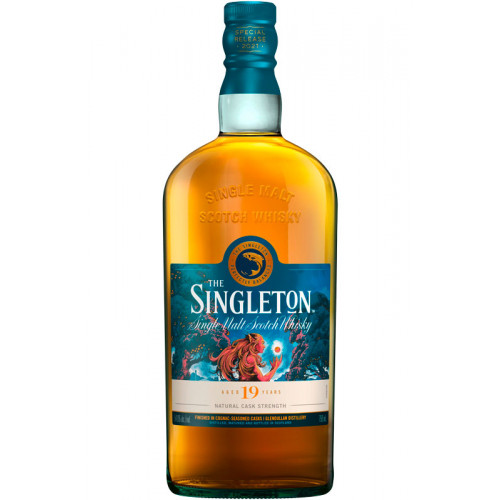 “Glendullan 2” is a real workhorse, putting out 4 million liters of spirit per year, producing several labels. The distillery itself has official bottlings and has been producing the Singleton brand since 2007. A bioplant which processes the spent lees was also opened on-site in 2014. The distillery has 3 wash stills with an impressive capacity of 33,700 liters, and 3 spirit stills with 23,800 liters of capacity. They source their unpeated maltings from Diageo's industrial site, and the mashing takes place in a 12-ton mash tun.

Diageo's 2021 Special Releases Collection follows the theme of hidden stories within iconic distilleries, connected via mythical creatures depicted on the bottles. The Singleton 19 Year Old Special Release Single Malt was aged in refill American oak casks before being finished in cognac casks and bottled at 109.2 proof. It's a rich and elegant expression with a pleasant sweetness and notes of dried fruit and spice.

Get your bottle of this cask-strength whisky today!

The nose is rich and aromatic with dried fig, apricot, and orange notes. On the palate, you'll find marzipan and vanilla cake, culminating in a long and pleasantly sweet finish with nutmeg and ginger touches.