Learn more
Size750mL Proof99.8 (49.9% ABV) *Please note that the ABV of this bottle may vary
This limited edition single malt scotch whisky was released in commemoration of Ardbeg Day 2014.
Notify me when this product is back in stock. 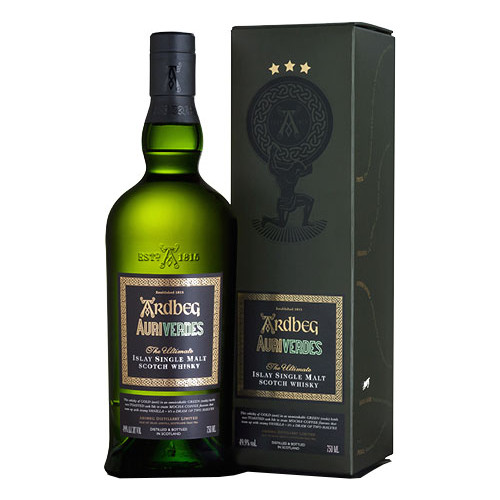 Each year, the distillery commemorates Ardbeg Day — a day celebrating the distillery's founding — with the release of a new whisky. Ardbeg Auriverdes Single Malt Scotch Whisky was released on Ardbeg Day 2014 (May 31, 2014). The term "Auriverdes"is derived from the Portuguese word "auri,"meaning gold, and "verde,"meaning green. The name of the whisky not only commemorates Ardbeg Distillery (the distillery's signature colors are gold and green), but also the 2014 World Cup, which was hosted in Brazil (the Brazilian flag is gold and green.). Ardbeg Single Malt Scotch Whisky is made from malted barley, which is peated to approximately 50 phenol parts per million. Once the grains have been fermented, they are distilled twice, first through a copper-pot wash still and then again through a copper-pot spirit still. The spirit still is equipped with a purifier, which acts as small condenser and causes a portion of the evaporating vapors to be pumped back into the pot and then re-distilled. This purification process, which is rare in the industry, results in whisky that has a signature fresh and malty flavor.

Following distillation, Ardbeg Auriverdes is matured in ex-bourbon barrels. "When the casks arrived in Scotland, we had the heads removed,"explains Gregor Mina, the brand director of Ardbeg Distillery. The heads of the casks were then replaced with "new American oak heads that I had specially made for us, which had been heat treated using a particular — and secret — toasting regime, designed to achieve a special flavor profile, producing in particular flavors of mocha and coffee. These re-worked barrels were then filled with spirit, and ultimately blended together with a proportion of "˜classic' Ardbeg from 1st and 2nd fill Bourbon barrels."

As a result, the whisky has an aroma of malt, vanilla and white pepper that give way to notes of spices, milk chocolate, dark tannins, red fruits, peat and toffee on the palate. The finish is bold and class, with hints of charcoal, iodine, smoke and peppercorns.

Aroma of malt, vanilla and white pepper. Notes of spices, milk chocolate, dark tannins, red fruits, peat and toffee on the palate. Finish is bold and class, with hints of charcoal, iodine, smoke and peppercorns.