Learn more
Size750mL Proof80 (40% ABV) *Please note that the ABV of this bottle may vary
The oldest whisky in Royal Brackla's range of sherried Highland single malts was finished in a combination of 3 sherry casks: oloroso, Paolo Cortado, and Pedro Ximénez. Wonderfully balanced, the expression is bottled at 80 proof.
Notify me when this product is back in stock. 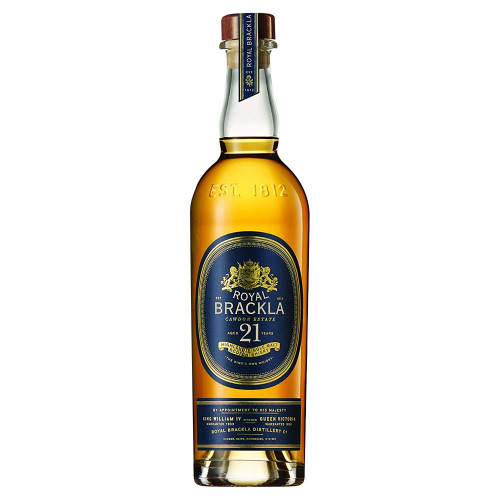 The Royal Brackla Distillery opened in 1812 by Captain William Fraser. Employing the family barley farm, the distillery had its big breakthrough in 1935. They produced the first single malt with a royal warrant, granted by King William IV, earning the nickname "The King's Own Whisky." The operation changed hands many times in the following two centuries before it was bought by Bacardi in 1998. "This is the one that was described as "The Drink Divine" by the Royal household in the 1830s. [...] "There’s only one whisky in the world that can be the first Royal whisky, I feel privileged to have worked on this," says Stephen Marshall of Bacardi.

Today the facility uses the finest barley and crystal clear water from the Cawdor Burn. More time is allowed for the fermentation and the slow distillation process leads to more contact of the spirit with the copper. This minimizes the sulfur notes and brings a fruity, slightly grassy character to the spirit. The liquid is then aged and finished in different sherry casks that give Royal Brackla its rich and fruity sherried notes.

The Royal Brackla range was revamped in 2019. The Royal Brackla 21 Year Old Single Malt Scotch Whisky is the oldest of the 3 expressions. The Highland single malt was finished in a combination of oloroso, Paolo Cortado, and Pedro Ximénez sherry casks, and is bottled at 80 proof. It's a serious and distinguished whisky expression that is fragrant and rich with beautiful sherried notes.

Get your bottle of this 21-year-old sherried single malt today!

The aromatic nose opens with toffee, berries, and dark fruit notes. The palate has dark fruit, cinnamon, malt, and muscovado sugar. Pleasantly sweet, the notes linger on the finish with a touch of nuts and a hint of dried fruit.