Size750mL Proof80 (40% ABV)
A gold Medal winner at the International Spirits Challenge in London and one of the highest rated Irish Whiskeys in Jim Murrays Iconic "Whiskey Bible." It was also featured in Ian Buxton’s publication "101 Whiskeys to try before you die."

NOTE: Writers' Tears has recently changed their labels, and as the original labels are being phased out, there is still a chance that you might receive a bottle different than what is pictured. But rest assured, the liquid remains the same, regardless of the label. 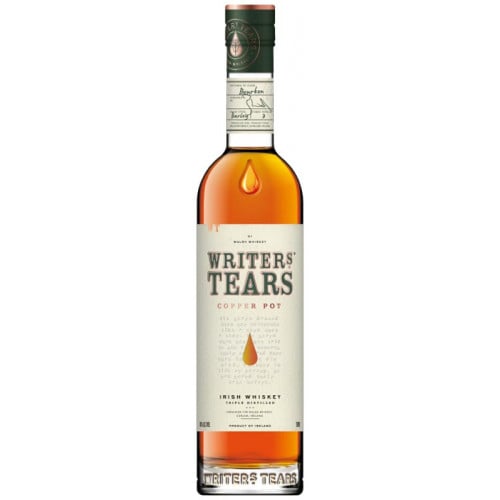 The picturesque Walsh Whiskey marks the return of Whiskey distilling to County Carlow for the first time in over 200 years. With its three specially crafted imported pot stills — built in the legendary Scottish Forsyths — and two, forty plate column stills. They are the only independent Irish Whiskey distillery to produce the three styles of Irish Whiskey — pot still, malt, and grain under one roof, in one still room. Walsh Whiskey has the capacity to produce 650,000 cases of Whiskey per annum.

Writers' Tears is a truly unique vatting of Single Malt and Single Pot Still whiskeys. This expression is non-peated and triple distilled from 60% Pot Still and 40% Malt. After being distilled the Irish whiskey is matured and aged in American Oak bourbon casks. This incredibly aromatic, flavorful expression won a Gold medal at the International Spirits Challenge in London. It is also one of the highest rated Irish Whiskeys in Jim Murrays Iconic "Whiskey Bible." "Altogether a very unusual Irish Whiskey, a throwback to the last century where spiced Pure Pot Still whiskey was married with Floral Single Malt" — Jim Murray. It has also been added to Ian Buxton’s publication "101 Whiskeys to try before you die."

Flashes of apple with hints of vanilla and honey on the nose with a distinctively pot still base. The palate is gently spiced with a burst of ginger and butterscotch with background notes of toasted oak. The finish is long and elegant with subtle notes of milk chocolate and almonds.