Size750mL Proof86 (43% ABV)
Matured for a minimum of 18 years, this whisky earned a score of 91 points from Whisky Advocate. 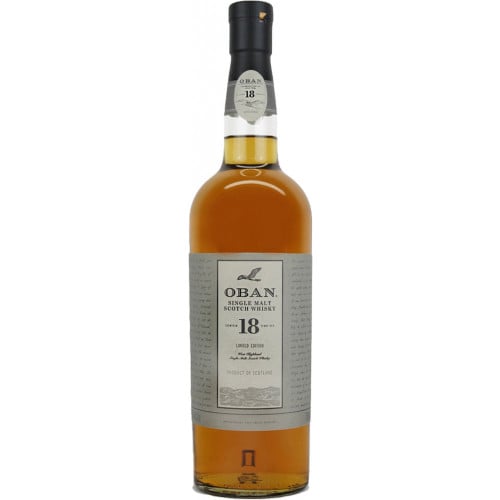 Oban Single Malt Whisky is made using 100% barley, which is malted to the distillery's exact specifications. After the barley is malted, it is partially germinated and gently dried over a peat kiln, giving it a slightly smoky, malty flavor profile. Then, the malted barley is mashed and fermented before being twice-distilled through Oban's lantern-shaped copper-pot stills. The stills are among the smallest in Scotland, and limit Oban's production to just 650,000 liters of whisky annually.

Following distillation, Oban Limited Edition 18 Year Old Single Malt Scotch Whisky is aged for 18 years in oak casks. During this beautyrest, the whisky is touched by its unique environment and geography — the warm, salty Gulf Stream and mild, temperate climate of Oban are reflected in the whisky. As a result of the distillery's unique stills and geography, the whisky has an aroma of citrus fruit, crisp sea breeze and salty tang that give way to notes of dried spices, seaweed and oak on the palate. The finish is soft and elegant, with touches of smoke and fruit set against a slightly oily background.

Aroma of citrus fruit, crisp sea breeze and salty tang that give way to notes of dried spices, seaweed and oak on the palate. Finish is soft and elegant, with touches of smoke and fruit set against a slightly oily background.