Size750mL Proof116 (58% ABV)
Langskip is Wolfburn’s flagship single malt Scotch whisky, matured for six years in first-fill Bourbon barrels. To ensure a huge depth of flavor, this award-winning whisky is bottled at almost cask strength, at 58% ABV. Wolfburn makes its whiskies the old way, by hand and without haste. 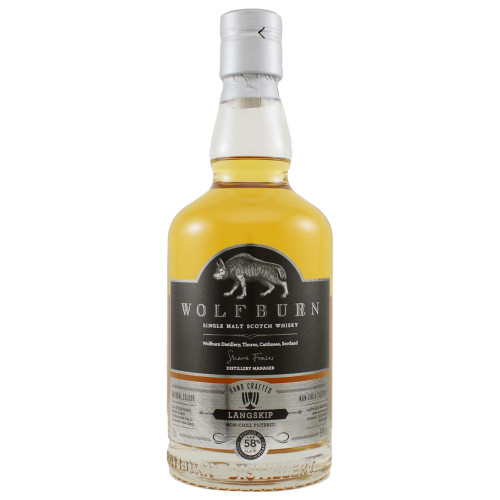 Wolfburn is the most northerly whisky distillery on the Scottish mainland, making world-class single malt whisky. The distillery overlooking the turbulent waters of Pentland Firth stands on almost exactly the same spot as the original Wolfburn distillery, which was founded in 1821 by William Smith on the outskirts of Thurso. Smith named his distillery after the watercourse it drew from, “burn” being the Scots word for stream or small river. In 1826, Wolfburn was the largest producer of malt whisky in the historic county of Caithness based on its annual production. After it was sold by his descendants, Smith’s distillery closed in the 1860s, and nothing was left but a pile of stones when a private consortium decided to bring it back to life in the early 2010s. The first casks at the new distillery were filled in 2013, and in 2016, the first single malt Scotch whisky was bottled on site.

The new Wolfburn distillery uses water from Wolf Burn, and crafts its whisky the same way it has always been made: by hand, using only the finest ingredients, and without haste. The milling and mashing-in is done by hand. Long fermentation is followed by slow and gentle double distillation in small stills to make a pure, smooth spirit, which is then matured in the finest hand-selected oak casks. Wolfburn ages its whisky in ex Oloroso Sherry butts made from European or American oak, ex-Bourbon barrels, and American oak quarter casks. All the whiskies are non-chill filtered, entirely naturally colored and bottled by hand. Wolfburn’s range features unpeated and peated expressions.

Langskip is Wolfburn’s flagship single malt whisky, matured for six years in first-fill Bourbon barrels. This sweet and balanced whisky is bottled at almost cask strength, at 58% ABV, to ensure a huge depth of flavor. Langskip has won several international awards since it was launched in 2018.

Aromas of fruit blossom meld with dried apples and light oak on the nose, with traces of raisins and dates mixed with rich fruit cake in the background. The palate is rich and sweet, with bursting flavors of maple syrup, dark chocolate, almonds and raisins. The lingering finish has hints of vanilla gently fading away with a warming trace of caramel at the end.