Learn more
Size750mL Proof92 (46% ABV) *Please note that the ABV of this bottle may vary
This is a modern single malt, aged in a combination of European and American oak sherry casks. Bottled at 92 proof, there were 24,000 bottles made available worldwide. Expect a thick and oily palate. 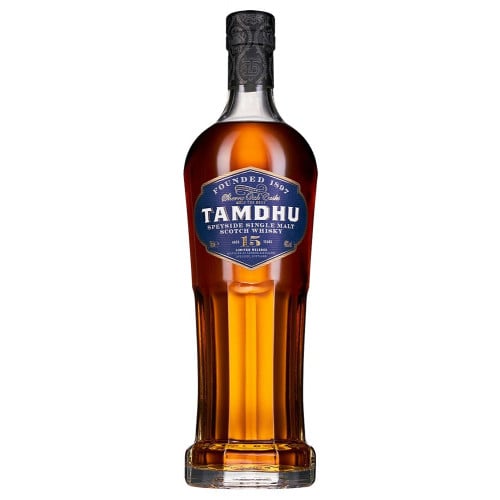 A limited-edition bottle, Tamdhu 15 Year Old Single Malt Scotch Whisky is a single malt that was aged in a combination of European and American oak sherry casks. Bottled at 92 proof, there were 24,000 bottles made available worldwide. Expect a thick and oily palate that delivers flavors of sultanas, butterscotch, orange zest, toffee, and a hint of raspberry jam. Enjoy this magnificent example of a modern sherry whisky neat or any way you prefer.

Inspired by the Diamond Jubliee of 1897, which celebrated then-Queen Victoria’s 60 years on the throne, a group of Scottish merchants and whisky traders pooled together capital (roughly equivalent to £20 million in today’s currency) to build the most technologically-advanced distillery the world had ever seen. After procuring land adjacent to the River Spey, the group hired Charles C. Doig, the most esteemed distillery architect and engineer of his time, to construct the industrial masterpiece. The result was Tamdhu Distillery, the most modern distillery of its era.

Tamdhu Distillery survived the ups-and-downs of the 20th century until finally closing in 2011 — shortly after its closing, the distillery was purchased by Ian Macleod Distillers, and is now producing whisky by the same exacting standards which earned Tamdhu Distillery its sterling reputation over the prior century.

Tamdhu has a solid core lineup aged exclusively in the finest sherry oak casks, a characteristic that defines their quality of their whiskies. A hint of peated barley, coupled with water drawn directly from the Tamdhu spring on the banks of the River Spey, generates a masterful combination.

Expect a thick and oily palate that delivers flavors of sultanas, butterscotch, orange zest, toffee, and a hint of raspberry jam. The finish is long with long-lasting notes of sherry.