Learn more
Size750mL Proof126.6 (63.3% ABV) *Please note that the ABV of this bottle may vary
The first in Highland Park's new annual series of cask-strength releases, this expression showcases the casks' influence in its unadulterated form. The sherry-seasoned casks of different ages used here were meticulously hand-picked by Master Whisky Maker Gordon Motion.
Notify me when this product is back in stock. 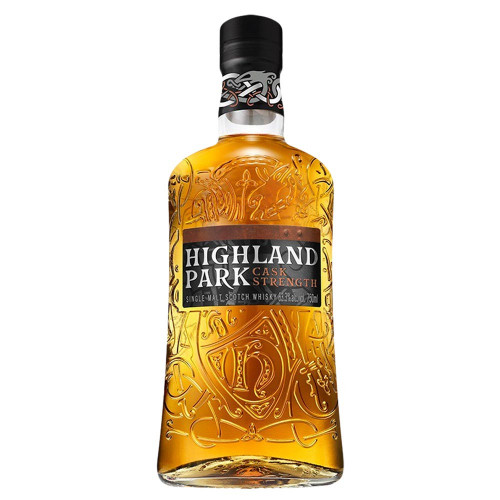 Today, over two centuries after its founding, Highland Park Distillery remains one of the few Scottish distilleries that continues to hand-turn, malt, and peat its own barley, using locally cut peat from the nearby Hobbister Moor. The malt is peated to 20 parts per million phenols, and then mixed with unpeated malt produced on the Scottish mainland. "You have to be careful here on the malting floor," says Eric Tait, Highland Park's Maltman. "You find it can get a wee bit slippery underneath. I have to turn the malt every eight hours to prevent the roots getting tangled and to get it all aerated properly. The airing also helps it to grow. The malt will be on the floor for seven days, and I'm running five floors at the moment."

After malting the barley, Highland Park Distillery smokes it using peat sourced from Hobbister Moor, a peat bog located approximately seven miles from the distillery. Hobbister Moor peat is sourced from floral heather bushes, which burn hotter and cleaner than the grassy peats of Islay. Also, the peat sourced from Hobbister Moor has greater derivatives of carbohydrates and a lower concentration of lignin than peat from Islay, giving Highland Park's peat a unique chemical fingerprint. The peat is "absolutely fundamental in understanding the flavor of Highland Park Whisky," says Russell Anderson, the distillery manager. Together with Orkney's unique environment (the temperate, moist climate of the archipelago results in an even maturation process), the peat gives Highland Park Whisky its traditional malty flavors that are tempered by an ever-so-subtle touch of smoke.

Fans of Highland Park and cask-strength whisky will be glad to know that the distillery is adding annual cask-strength releases to their permanent lineup. Highland Park Cask Strength No.1 is the first in the series that is meant to showcase the casks' influence in its pure, unadulterated form. "I want to give everyone who loves Highland Park the chance to experience our single malt whisky in its purest form by bottling ‘straight from the cask’ but allowing you to choose the strength you want to drink this special single malt," says Master Whisky Maker Gordon Motion. The different-aged sherry-seasoned American oak casks are hand-selected by him and the spirit is bottled without chill-filtration at 126.6 proof.

The bold whisky opens with sweet floral notes and vanilla on the nose along with peat. It's rich on the palate with salted caramel, heather honey, fresh ripe citrus, nutmeg, and a whiff of crackling fire. Finishes long with lingering peat smoke, spice, and crème brûlée.