Be the first to review this product
This limited edition whisky commemorates Ardbeg Day 2015 as well as the 200th anniversary of the distillery’s founding.
Add to Wish List
Notify me when this product is back in stock.

Each year, the distillery commemorates Ardbeg Day — a day celebrating the distillery's founding — with the release of a new whisky. Ardbeg Perpetuum Single Malt Scotch Whisky is the distillery’s release for Ardbeg Day 2015 (officially May 30th, 2015), which also happens to be the 200th anniversary of Ardbeg’s founding. This momentous occasion has prompted an extra-special release that is, according to Ardbeg’s Dr. Bill Lumsden, “inspired by the man styles, ideas and quirks of fate which have influenced Ardbeg recipes over time. Perpetuum combines different styles, different flavors, different dreams and different trials, all skilfully married together in a melange of the very best Ardbeg has to offer.”

Ardbeg Single Malt Scotch Whisky is made from malted barley, which is peated to approximately 50 phenol parts per million. Once the grains have been fermented, they are distilled twice, first through a copper-pot wash still and then again through a copper-pot spirit still. The spirit still is equipped with a purifier, which acts as small condenser and causes a portion of the evaporating vapors to be pumped back into the pot and then re-distilled. This purification process, which is rare in the industry, results in whisky that has a signature fresh and malty flavor.

Ardbeg Perpetuum is composed of both “very old and very young whiskies,” which have been aged in a combination of ex-bourbon and ex-sherry casks. As a result, the whisky has a straw gold appearance with classic aromas of dark chocolate, peat smoke and salty sea air. The nose transforms into a dazzling array of canned peaches, honey, vanilla and chili on the palate, and leads to a never-ending finish filled with licorice, citrus, oak and more hints of smoke.

This limited-edition whisky is sure to sell out quickly.

Straw gold appearance with classic aromas of dark chocolate, peat smoke and salty sea air. The nose transforms into a dazzling array of canned peaches, honey, vanilla and chili on the palate, and leads to a never-ending finish filled with licorice, citrus, oak and more hints of smoke. 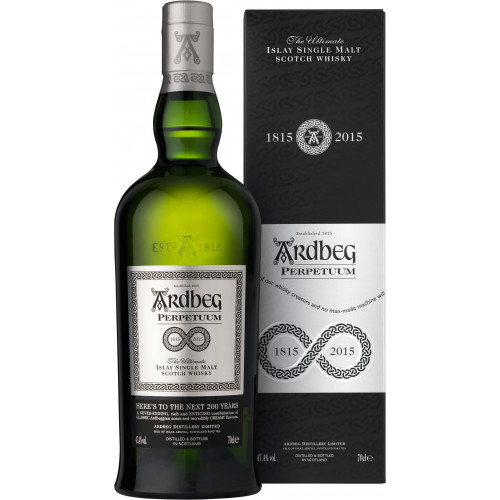