Size750mL Proof112 (56% ABV)
This whisky was distilled in 2008 at the Miltonduff Distillery. The small-batch whisky spent 11 years in 4 ex-bourbon oak hogsheads before being bottled in 2020 at 112 proof. It's a light and refreshing Speysider with no coloring, additives, or chill-filtration. 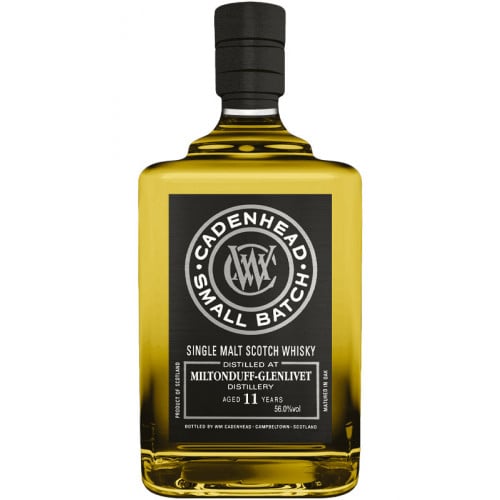 W.M. Cadenhead is an iconic whisky bottler. The original company was established by William Cadenhead in 1842, making it the oldest independent bottler in Scotland. The company remained in the same family until 1972, when it was taken over by J. & A. Mitchell & Co., the owners of Springbank Distillery. Their focus is on bottlings of single cask and small batch spirits from Scotland and across the globe. They pride themselves on keeping everything natural, meaning that no coloring, additives, or chill-filtration are employed. With a focus on quality, all of their releases are bottled in Campbeltown.

Miltonduff Distillery opened its doors in 1824. Located near Elgin in the Speyside region of Scotland, it was built on the site of a priory ― its mill, to be exact. Miltonduff was one of the first officially licensed distilleries. Initially known as Milton Duff, the name was soon changed into a single word. Today, the distillery operates under Pernod Ricard.

Cadenhead's Miltonduff-Glenlivet was distilled in 2008 at the Miltonduff Distillery. The small-batch whisky spent 11 years in 4 ex-bourbon oak hogsheads before being bottled in 2020 at 112 proof. It's a light and refreshing Speyside Scotch with notes of vanilla, white chocolate, lime, ginger, apple, mint, and nuts.

Get your bottle of this Speyside whisky today!

The nose is crisp, light, and dry with vanilla and white chocolate aromas. The palate has notes of lime, ginger, apple, olive oil, mint, fennel, as well as savory soy sauce and olive oil. The finish is creamy and refreshing with coffee and nutty notes.