Learn more
Size750mL Proof96.8 (43.4% ABV) *Please note that the ABV of this bottle may vary
This 16-year-old single malt is part of the new core range for Mortlach, boasting a signature meaty profile achieved through a 2.81 times distillation process coined "The Way.” 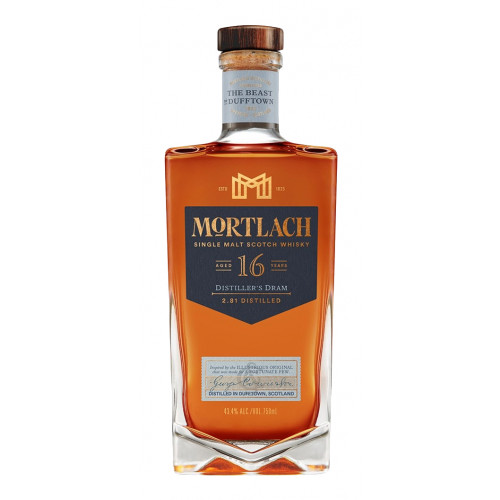 Mortlach Distillery was founded in 1823 by James Findlater, together with his friends Alexander Gordon and James Macintosh. In 1831, however, Findlater sold the distillery to John Robertson for the paltry sum of ₤270. In 1837, it was sold again to John and James Grant, who dismantled the distilling equipment and shuttered the doors to the distillery. For the next two decades, the building was used first as a brewery, and then, rather curiously, a church. In 1851, however, the distillery began producing whisky once more. Even at the time, it was an impressive distillery, according to the Wine & Spirits Trade Record. The distillery had two still-houses: “in one there are three old-fashioned stills…in the other there are three larger stills, installed in 1897.” The distillery also had “four gigantic malt floors, and the largest mash tun in the district.”

This 16 Year single malt is part of the new core range for Mortlach (replacing their Rare Old, Special Strength, 18 Year and 25 Year). Mortlach whiskies have a signature meaty flavor profile, achieved through a 2.81 times distillation process coined “The Way.” Aged in a combination of refill and first-fill American and European oak ex-sherry casks this Mortlach beast is bottled at 43.4% ABV.

The nose is honeyed and rich with dark fruits and caramel. The palate is deeply complex and balanced with notes of vanilla, nuttiness, subtle citrus zest, oak, peaches and leather. Full-bodied, briny, and savory on the finish.