NOTE:
Vintage may vary.
Aged for sixteen years and finished in sherry casks, this limited edition whisky is one of the boldest and most intense whiskies ever made.
Notify me when this product is back in stock. 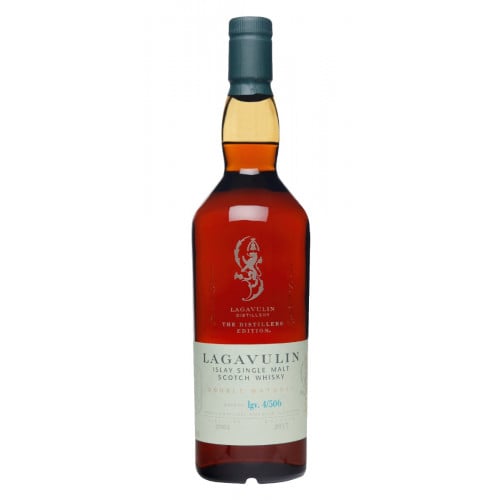 Lagavulin Distillers Edition Single Malt Scotch Whisky is matured for 16 years in traditional, oak casks in the distillery's warehouses. During its maturation, Iain McArthur, Lagavulin warehouseman, ensures that the whisky matures evenly and consistently (McArthur has been working at the distillery for over four decades). After the whisky has matured in traditional oak casks, it is double-barreled, or finished, in casks that were previously used to mature sherry made from Pedro Ximinez grapes. Once harvested, Pedro Ximinez grapes shrivel up to a raisin-like state, which concentrates the sugars in the grape and results in a sweet wine with legendary viscosity and intensity. This double-maturation process complements the intensely smoky notes of the whisky and adds an additional layer of complexity.

Lagavulin Distillers Edition Single Malt Scotch Whisky has an aroma of intense raisins, prunes and smoke. The initial notes are surprisingly sweet, with subtle hints of caramel, vanilla and dates that are balanced by a smoky undertone. The ever-lasting finish has deep, dark notes of red fruits and a round, bold finish.

Pick up a bottle of limited edition Lagavulin today!

Intense aroma of peaty smoke, wood spices and Earl Gray tea. Notes of peat, rich smoke and salty tang, which are balanced by subtle hints of vanilla and honeyed oak. Finish is incredible and intense, with complex notes of sweet caramel and fruits belying bolder notes of peat and smoke