This product is available in: MN, NY, WA Unfortunately, we can't ship to PO Boxes and APO addresses.

Size750mL Proof100 (50% ABV)
This whisky won a Silver Outstanding in the Scotch Single Malt - Islay category at the 2017 International Wine & Spirit Competition.
Notify me when this product is back in stock.

This product is available in: MN, NY, WA Unfortunately, we can't ship to PO Boxes and APO addresses. 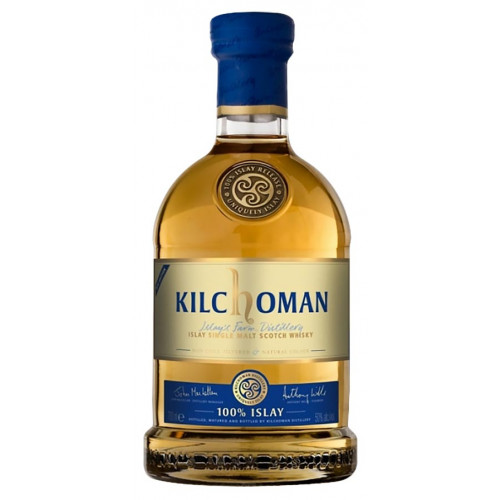 Situated along a rugged farm on the western coast of Islay, Kilochman Distillery was founded in 2005 and is the first new distillery on Islay in over 125 years. “When we first started work on Kilchoman in 2003,” says Anthony Wills, the distillery's founder, “the ambition was to build a distillery that was true to the traditions of distilling on Islay — small farm distillers where every part of the whisky-making process was done on site and I think we have managed to do just that.

Kilchoman 100% Islay single malt is exactly what it says it is; 100% Islay, with all parts of the whisky making process, from barley to bottle, completed on site at the Kilchoman farm. The single malt carries quite a distinction, as it is “the only distillery in Scotland to produce single malt in this traditional hand crafted way” (Kilchoman). Produced from barley directly sourced and exclusively grown on the distillery grounds, the peating levels are slightly lighter than the other expressions in the Kilchoman stable, yielding a fresh, floral balance when coupled with the bourbon cask maturation.

100% Islay is aged in a combination of fresh and refill ex Buffalo Trace bourbon barrels. Robin Bignal, Production Manager; “As the bourbon barrel maturation influences the spirit over time it has taken on a real depth of character and complexity to add to the light citrus fruit and peat smoke of the Kilchoman spirit.” This whisky won a Silver Outstanding in the Scotch Single Malt - Islay category at the 2017 International Wine & Spirit Competition. Bottled at a solid 100 proof, the “100% Islay Way.”

Smoke, fruit, with floral aromas on the nose. On the palate are flavors of peat smoke, barley, vanilla, spice, honey and brine. The finish is drying with notes of dark chocolate.