Size750mL Proof93 (46.5% ABV)
This whisky is first matured in American white oak ex-bourbon casks before half of it is transferred to Portuguese Tawny Port pipes. The result is a nuanced, expertly-balanced fruitiness. The gift pack comes with 2 glasses sporting the Dalmore Royal Stag logo. 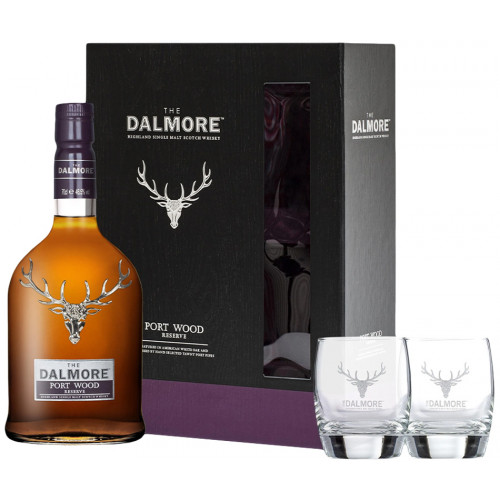 Situated along the banks of Cromarty Firth in the Highlands region of Scotland, The Dalmore Distillery was founded in 1839 by Alexander Matheson, who had earned his fortune illegally importing opium from the Far East. In 1886, Matheson sold Dalmore to Clan MacKenzie, whose century-long stewardship and defining influence over the distillery is still evident today — the 12-point stag adorned on every bottle of Dalmore Whisky is derived from Clan MacKenzie's coat of arms.

Once the barley has been fermented, the wash is distilled twice, first through Dalmore's copper-pot wash stills and then again through its copper-pot spirit stills (the stills date back to 1874). The wash stills have an unusually flat-top, while the spirit stills are equipped with cold water jackets. This unusual equipment — the water jackets rinse cold water near the top of the still — makes it difficult for the lighter elements of the whisky to pass through the still, and ultimately results in a more opulent and rich whisky.

The Dalmore Principal Collection comprises 6 distinct expressions that showcase master distiller Richard Paterson's skills. The Port Wood Reserve is first matured in American white oak ex-bourbon casks before half of it is transferred to Portuguese Tawny Port pipes. Bottled at 93 proof, it's a smooth single malt with a perfectly balanced fruity sweetness. This gift set comes with a pair of tumblers branded with The Dalmore Royal Stag logo.