$332.99
Caskers Rewards members earn up to 16 store points back when buying this bottle.

Size750mL Proof99 (49.5% ABV)
This Vaults 2019 edition is among the highest-proof expressions from the Widow Jane whiskey label, finished in eight-year air-seasoned American oak casks.
Notify me when this product is back in stock.

Caskers Rewards Caskers Rewards members earn up to 16 store points back when buying this bottle. Learn more
Out of stock
Skip to the end of the images gallery 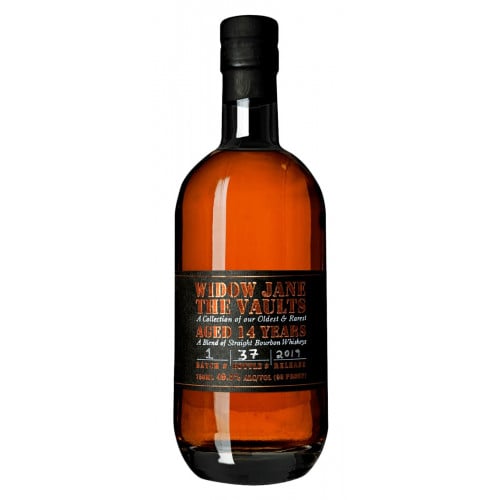 Reviving the lost art of marrying the finest spirits, Widow Jane whiskeys are hand-assembled in Brooklyn using the richest & rarest straight bourbons from Kentucky, Tennessee, and Indiana, in barrel batches of five, non-chill filtered and proofed with their own mineral water from the legendary Rosendale Mines of New York.

Widow Jane is all about high-intensity, their flavorful and well-aged whiskeys are cut with hard, sweet limestone-filtered water that’s known to make great whisk(e)y, from Kentucky to Scotland. Add New York attitude and non-chill filtration to that and you get a whiskey that’s unadulterated and robust in mouthfeel.

When the Widow Jane team set out to produce their own whiskey, they wanted to offer something that was flavor-forward, bold and rich with character but most importantly had a taste of New York. All Widow Jane whiskeys are proofed with pure limestone water from the legendary Rosendale Mines of NY, just 100 miles north from their home in Red Hook, Brooklyn. It was limestone from this mine which was used to build the foundation of some of New York’s greatest structures: the gargantuan caissons of the Brooklyn Bridge, the Empire State Building and the 27,000-ton pedestal to the Statue of Liberty.

This whiskey is the first-ever release in Widow Jane’s “The Vaults” collection, a curated annual release of the oldest bourbons made from Widow Jane stock. This blend of 14-year-and-older Tennessee and Indiana bourbons is drawn from 20 barrels hand-selected and blended by Widow Jane Head Distiller Lisa Wicker, plucked from their Rickhouse in Brooklyn, NY.

This Vaults 2019 edition is among the highest-proof expressions from the Widow Jane whiskey label, finished in eight-year air-seasoned American oak casks. On the nose, you’ll find notes of worn leather, wintergreen, birch tree, and sassafras aromas, followed by a palate of tobacco, vanilla, lemon, brown sugar, cocoa powder and mint, and a finish of campfire, cherry, nutmeg, honey, and vanilla.

On the nose are notes of worn leather, sassafras, birch beer and wintergreen, before a palate of tobacco, vanilla, lemon, brown sugar, cocoa powder and mint, followed by a finish of campfire, cherry, nutmeg, honey and vanilla.