Size750mL Proof86 (43% ABV)
This rye whiskey is limited to 1000 bottles and is a collaboration between WhistlePig , Flaviar, and 4 top chefs who employed their sensory expertise in creating the perfect blend.
Notify me when this product is back in stock. 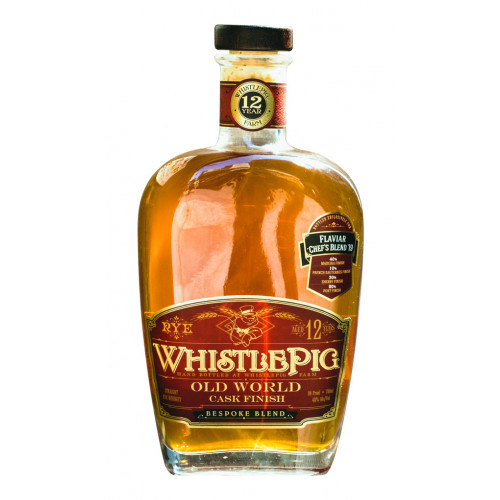 WhistlePig has once again teamed up with Flaviar, this time adding four top chefs into the mix, in order to create a very special blend — WhistlePig Flaviar Chef's Blend 2019. This edition follows in the footsteps of last year's battle between the East and West, bringing together the worlds of blending and culinary delight. Since both professions are based on the same senses, the world-class chefs felt right at home, especially with the expert guidance of Master Blender Pete Lynch. Under his watchful eye, they came up with a perfect blend, consisting of 40% Madeira, 30% Sherry, 20% Port and 10% Sauterne. Limited to 1000 bottles, this special blended 12YO rye whiskey has a wonderfully fruity aroma, accompanied by notes of spice and vanilla. Expect a palate of figs and apricots, as well as tobacco, spice, and honey, culminating in a finish that is as rich as it is long.

This special blended 12YO rye whiskey has a wonderfully fruity aroma, accompanied by notes of spice and vanilla. Expect a palate of figs and apricots, as well as tobacco, spice, and honey, culminating in a finish that is as rich as it is long.