Size750mL Proof86 (43% ABV)
This year’s release is the first ever majority WhistlePig Whiskey. Comprised of 52% of our 3-year-old Rye Whiskey, blended with 31% 6-year aged whiskey and 17% 10 year aged whiskey from Alberta, Canada.
Notify me when this product is back in stock. 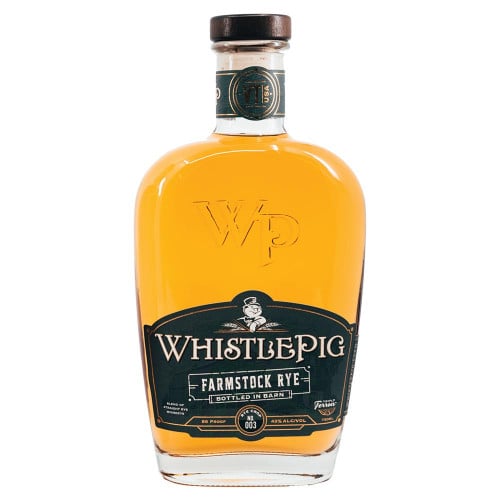 About WhistlePig FarmStock Rye Crop No. 003

Each annual release of FarmStock Rye not only adds dimension to the Whiskey, but also a new chapter in the WhistlePig story. FarmStock Rye Crop 003 marks a historic step - the first ever majority WhistlePig Whiskey - at 52%.

FarmStock Rye Crop 003 is the third release of WhistlePig’s annual Triple Terrior Whiskey - created from our rye grain, distilled and proofed with water from the WhistlePig farm, and aged in their custom Vermont White Oak. This year’s release is the first ever majority WhistlePig Whiskey. Comprised of 52% of our 3-year-old Rye Whiskey, blended with 31% 6-year aged whiskey and 17% 10 year aged whiskey from Alberta, Canada.

Sweet and aromatic, with vanilla, maraschino, roasted chestnuts and hints of cigar box. On the palate are notes of oak, toffee and baking spices followed by soft notes of creme brulee and rose petals. The finish is warm and lingering with a pleasant rye spice.