Size750mL Proof100 (50% ABV)
The teams at George Dickel and Leopold Bros each contributed their own, in-house rye whiskey for this blend. One is chill-filtered through maple charcoal, the second a pre-Prohibition style rye.
Notify me when this product is back in stock. 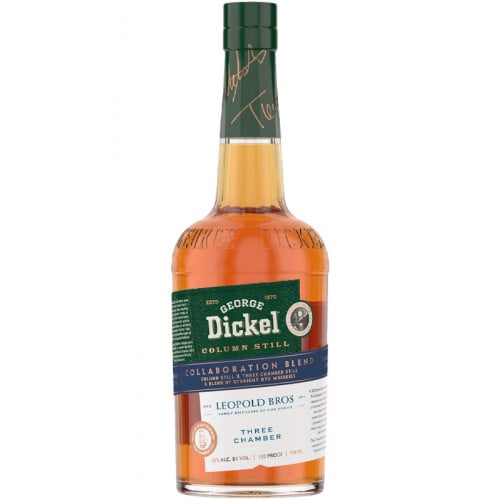 For this release, they partnered with another distillery, the Denver-based Leopold Bros ― the brainchild of Todd Leopold. After receiving his diploma in Malting and Brewing from the Siebel Institute in Chicago, Todd moved to Germany and began working at the Doemens School of Brewers and Maltsters in Munich. Then, he apprenticed at four different breweries and distilleries in Germany, before moving to Kentucky to study distilling. In 2008, Todd, along with his brother Scott, moved back to his parents' home in Littleton, Colorado and opened the doors to Leopold Bros. Distillery.

The expression is a blend of George Dickel's Column Still Rye and Leopold Bros' Three Chamber Rye. One is chill-filtered through maple charcoal, the other a pre-Prohibition style rye. The Collaboration Blend Rye also marks the first time that whiskey from the Cascade Hollow Distillery gets released ― until now, George Dickel sourced their rye whiskey from MGP. Bottled at 100 proof, this is a unique release with 2 distinct whiskeys coming together in perfect harmony.