Size750mL Proof100 Proof (50% ABV)
Aged for 10 years, this whiskey was named among the top five whiskeys of the year by The Wall Street Journal.
Notify me when this product is back in stock. 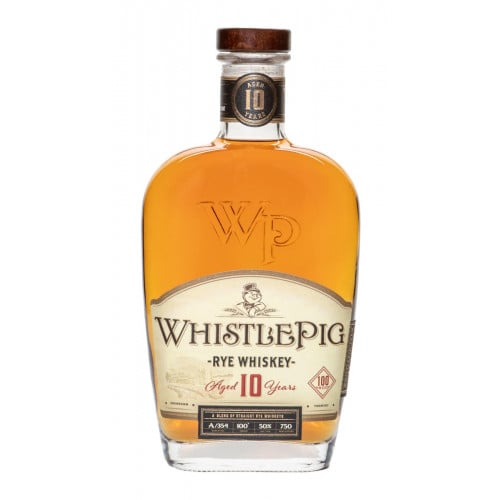 After the rye is fermented and distilled, it is aged for ten years — first in new American oak casks and then in second-use bourbon casks. This decade of maturation rounds out the flavors of the rye, and gives it just a hint of sweetness. After aging, WhistlePig Straight Rye Whiskey is brought to 100 proof and bottled by hand at WhistlePig Farm in Vermont.

WhistlePig Rye has already received a number of accolades: it received a perfect five out of five stars from F. Paul Pacault's Spirit Journal, it earned a score of 96 points from Wine Enthusiast (the highest score a rye whiskey has ever scored), Details Magazine called it "America's Best New Whiskey" and it was named among the top five whiskeys of the year by The Wall Street Journal.

Nose is rich and heavy, with notes of allspice, ginger, nutmeg, clove and a hint of honey. Taste is full-bodied, with warm, floral notes and a hint of honey and cinnamon. Mid-palate has notes of rye, toffee and mint. Finish is warm initially, with complex notes of butterscotch and vanilla.