Winner in the category Craft Producer of the year by Whisky Magazine's Icons of Whisky 2019! 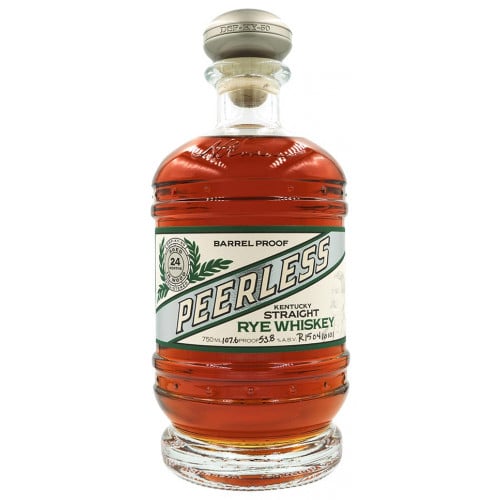 Now, a century later, Peerless Whisky is in the hands of Kraver’s great-grandson Corky Taylor and great-great-grandson Carson Taylor. Keeping Kraver’s legacy alive, the duo has resurrected the brand, even distilling under the original Distilled Spirits Plant number, DSP-KY-50 in a centuries-old warehouse in downtown Louisville, near the Ohio River.

Peerless Whiskey is distilled using a process that values quality over cost. They use a sweet mash, which is costlier than the more commonly used sour mash. The spirit also enters the barrel at a lower 107 proof, which results in the use of 17% more barrels. Water is added before the maturation process as opposed to after, transforming it from a dilutant to an ingredient.

The straight rye is non-chill filtered and bottled at barrel strength, revealing a robust, authentic, unadulterated whiskey that was ranked No.15 by Whisky Advocate, on their list of Top 20 Whiskies of 2017. Peerless Kentucky Straight Rye Whiskey is an incredibly well-balanced whiskey with smooth, sweet notes of brown sugar, oak, and citrus. “We craft our spirits at an unhurried pace, like my great-grandfather did. Only the best bourbon and rye whiskey leaves our doors” says Corky Taylor.

Caramel and baking spices with a slight hint of dried citrus on the nose. The palate is well-balanced with a smooth mouthfeel, bolstered by sweet notes of maple brown sugar and light citrus sweetness. A dash of water brings out notes of caramel. The finish creamy with a hint of oak, lacking the prominent pepper spice seen in most ryes.