Size750mL Proof92 (46% ABV)
Hand-bottled on the WhistlePigFarm, in commemoration of the WhistlePig rye harvest and inaugural Vermont floor malting, this 18-year-old WhistlePig is the oldest release of WhistlePig to date.
Notify me when this product is back in stock. 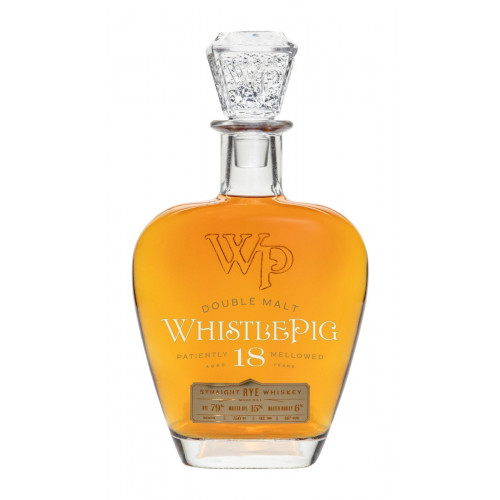 Dave Pickerell built WhistlePig in pursuit of crafting the world’s finest and most interesting Rye Whiskeys. After years of devotion to patient aging and innovative blending, WhistlePig has turned their attention experimenting with grain - in particular, the practice of malting rye. Before industrial catalysts were introduced to increase efficiency, farmer distillers would malt a small portion of their rye harvest in order to access the grain's starch content and set off the fermentation process. Floral, earthy flavors imparted by malted rye would add nuance to the bold, peppery spice character of classic rye whiskey.

To harness these flavors for the oldest expression of WhistlePig yet, they selected a whiskey distilled from 79% rye, 15% malted rye, and 6% malted barley. These grains form a harmony that spans the flavor spectrum, at once soft and floral, rich and savory, and full of spice. Its complexity is only heightened after 18 years in the barrel.

Hand-bottled on the WhistlePig Farm, in commemoration of the WhistlePig rye harvest and inaugural Vermont floor malting, this 18-year-old WhistlePig is the oldest release of WhistlePig to date. Distinctive from whiskeys of WhistlePig past, focusing on age statements, unique finishes this release focuses on the influences of mash bill on flavor. Bottled by hand with a bespoke Vermont glass stopper, hand-pressed on one of the last remaining 19th-century glass pressing machines, rescued from a historic factory and installed at the WhistlePig Farm.

Sweet and aromatic, with toasted oak, berries, and nutmeg on the nose. The palate is elegant and spicy, mildly fruity, and pleasantly floral. Vanilla and oak notes appear with time. The finish is wonderfully lingering, clean, and spicy on the finish.