Caskers Rewards members earn up to 9 store points back when buying this bottle.
Size750mL Proof92 (46% ABV)
Inspired by the legendary hybrid creature: the jackalope. Each whiskey in this meticulously crafted blend of bourbon and rye was aged a minimum of 10 years.
Notify me when this product is back in stock. 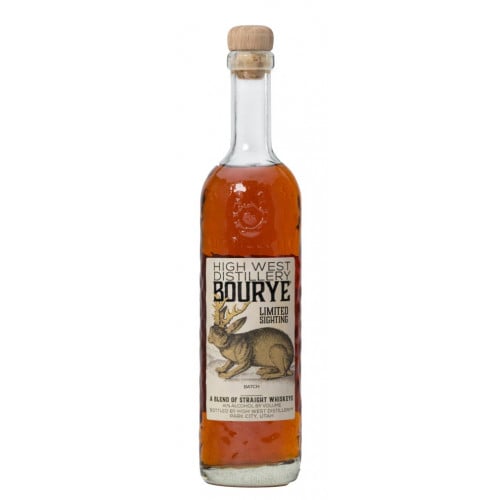 Situated at the bottom of the Quitting Time Ski Run in Park City, High West Distillery & Saloon is the first distillery in Utah since Prohibition and the only ski-in gastro-distillery in the world. “We wanted to call High West a ‘saloon,” says David Perkins, High West’s founder, “because we wanted to pay homage to the history of saloons in the old West and the important role they played in each and every town that had one. The saloon was the main meeting place where town hall was held, important announcements were made, and people went to eat and drink. We want people to share that sense of community and friendship over High West.”

High West Bourye is crafted from a blend of rich bourbons that have matured for a minimum of ten years, and extraordinary rye whiskeys that have aged for ten and sixteen years old. The whiskey offers “a combination of sweet honey nougat, mulling spices, and candied fruits,” says Perkins. “It’s very similar to the original Bourye in terms of age and taste profile, but we actually think this one is better.”

Bourye is a combination of "Bou" for bourbon and "rye" for..well, rye whiskey. Because combining bourbon and rye is a bit unusual, we couldn't help thinking of the jackalope. Legend has it that the best way to catch a jackalope is to lure it with whiskey (as they have a particular fondness for this beverage). Once intoxicated, the animal can quickly be caught.

Inspired by the legendary hybrid creature: the jackalope, this High West fusion is a proprietary blend of mature bourbon and rye (sure to attract even the most finicky of jackalopes). All sourced from MGP, Lawrenceburg, Indiana, each whiskey in this meticulously crafted blend was aged a minimum of 10 years.