This product is available in: FL, IL, TX, WA Unfortunately, we can't ship to PO Boxes and APO addresses.

Size750mL Proof82 (41% ABV)
The first whiskey to come from Firestone & Robertson, this blended expression has garnered several awards, including a Double Gold Medal at the San Francisco World Spirits Competition.

This product is available in: FL, IL, TX, WA Unfortunately, we can't ship to PO Boxes and APO addresses. 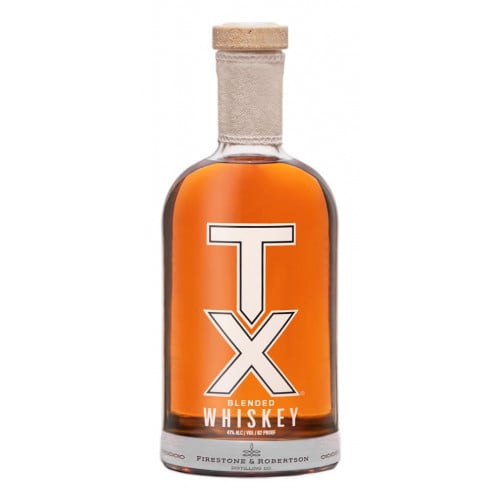 Leonard Firestone and Troy Robertson met entirely by chance via the playgroup that their children shared. The first was in TV broadcasting, the second in the oil and gas industry. As chance would have it, both were on the lookout for a new career. It wasn't until they made separate plans to visit the same craft distillery to learn about the trade ― once again by chance ― that they realized they both wanted to get into the whiskey business. As it turned out, their visions of making a true Texas whiskey the old fashioned way were nearly identical. It was at that point in 2009 that the groundwork was laid for the Firestone & Robertson Distilling Co.

The seasoned entrepreneurs immediately began searching for a suitable building and found a reclaimed Prohibition-era warehouse in Fort Worth to be the perfect spot. After extensive renovation, they had a pair of Vendome copper pot-column hybrid stills built to their exact specifications. The whiskey operation was ready to go. Their lineup now has several bourbons that showcase "Texan craftsmanship, dedication to detail, and innovation." Each bottle is capped with unique caps that Troy designed at his wood shop at home. The corks are made from carefully selected leather from the best boot and saddle producers ― all by hand.

Their TX Blended Whiskey was the very first expression they released and is a blend of American whiskeys. It has won a Double Gold Medal at the San Francisco World Spirits Competition. The bottle comes with the canvas neckwrap and unique reclaimed cowboy boot leather cap that channel the Texan spirit.

The whiskey opens with vanilla, pear, honey, and oak on the nose. Honey butter, banana, caramel, and coffee are on the palate that culminates in a smooth and long finish with a touch of sweetness.