Size750mL Proof92 (46% ABV)
This exquisite single malt is highly acclaimed, winning awards one after another. In 2017 Westland Sherry Wood received 97 Points at the Ultimate Spirits Challenge and won the Master Award at the American Whiskey Masters. in 2016, it won the Gold medal at the Whiskies of the World Awards in American Malt category. On top of it all, it was listed as one of the Top 100 spirits in the World by Wine Enthusiast. 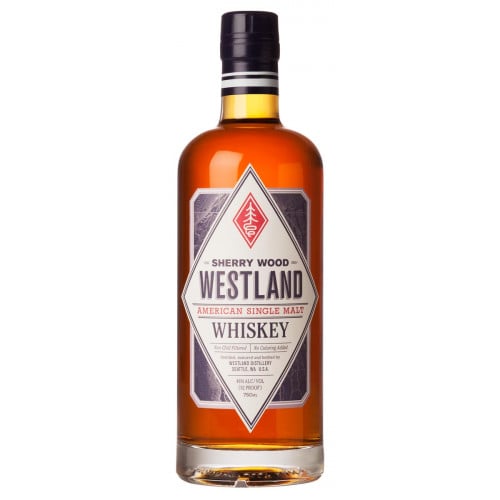 Westland championed the American single malt movement with a visionary spirit.
Westland Distillery was co-founded by Matt Hofmann in 2010 in Seattle, WA. Westland Distillery mashes, distills, matures and bottles American Single Malt Whiskey in the heart of the Pacific Northwest. Matt Hofmann— Westland’s co-founder, Master Distiller, and honorary pioneer of the American Single Malt whiskey movement— fell in love with the single malt after going to Islay and experiencing the golden drams of Bruichladdich.

Westland Sherry is where the old and new world meet. The use of ex-sherry having long been a part of the Scottish tradition, its decadent, fruit-laden palate serves as a perfect balance of Westland’s signature grain-house style. Westland’s house style single malt is made from five exceptional roasted and kilned barley malts the base of which is pale malt grown right in the state of Washington.

Drawing inspiration from the rich brewing culture of the Pacific Northwest, several specialty malts (Washington Select Pale Malt, Munich Malt, Extra Special Malt, Pale Chocolate Malt and Brown Malt) are then added before the resulting mash is fermented with a Belgian brewer’s yeast for 144 hours. Then, the whiskey is distilled through Westland’s copper-pot stills.

The sherry casks are sourced from a family owned cooperage in Tonelería del Sur in Montilla, Spain where the skilled hands of Rafael Cabello and his team have been crafting some of the highest quality Pedro Ximénez and Oloroso sherries for nearly a century. This exquisite single malt is highly acclaimed, winning awards one after another. In 2017 Westland Sherry Wood received 97 Points at the Ultimate Spirits Challenge and won the Master Award at the American Whiskey Masters. in 2016, it won the Gold medal at the Whiskies of the World Awards in American Malt category. On top of it all, it was listed as one of the Top 100 spirits in the World by Wine Enthusiast.

The nose is immediately rich, with honey-dipped oatmeal raisin cookies. Maple syrup follows close behind, drizzled over banana pancakes. The palate initially offers some kiwi with more maple and raisin syrup notes. The palate evolves even further into sweet cookies and pastries, getting darker and richer with time before eventually ceding the palate to stewed yellow fruits on the finish.

3.2 out of 5
(2 reviews)
Write a review
Real email address is required to social networks
Sign in
Login with Google
Login with Facebook
Or
We also recommend