Size750mL Proof92 (46% ABV)
This unique whiskey aged in a combination of new American oak and ex-bourbon casks earned 94 points from the Beverage Testing Institute in 2015. 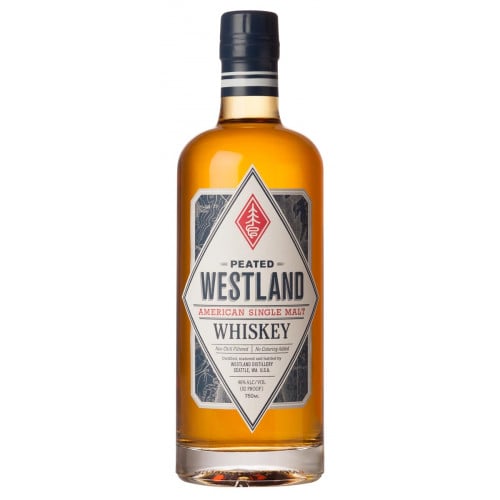 Westland Distillery was co-founded by Matt Hofmann in 2010 in Seattle, WA. Westland Distillery mashes, distills, matures and bottles American Single Malt Whiskey in the heart of the Pacific Northwest. Hofmann— Westland’s co-founder, Master Distiller, and honorary pioneer of the American Single Malt whiskey movement— fell in love with the single malt after going to Islay and experiencing the golden drams of the Islay.

Westland American Oak Single Malt Peated Whiskey is made from five exceptional roasted and kilned barley malts the base of which is pale malt grown right in the state of Washington. Drawing inspiration from the rich brewing culture of the Pacific Northwest, several specialty malts (Munich Malt, Extra Special Malt, Pale Chocolate Malt and Brown Malt) are then added before the resulting mash is fermented with a Belgian brewer’s yeast for 144 hours.

This Westland peated malt is an inspired whiskey, crafted from a variation of their house malt style, and made from some of the smokiest peat in the world. Combining a plethora of spirits with malt-focused profiles yields a single malt that masters the spectrum of peaty and smoky flavors, creating a balance that doesn’t dominate the palate. The peat is solid dose of smoke to satisfy peat lovers, while the malt-forward profile mash bill forms a well-round whiskey with cross appeal. Being entirely filled into new American oak and ex-bourbon casks also adds a new dimension to the peated whiskey.

As a result, Westland Peated American Single Malt has an aroma of peanut butter, campfire, honey and biscuits, which leads to an initially nutty palate filled with pistachios and almonds, as well as red fruits, particularly cherries. The palate eventually shifts towards deeper notes of leather and clove, and the whiskey finishes with more nutty chocolate, as well as a delightfully charred, peaty texture. Earning 94 points from the 2015 Beverage Testing Institute, a Gold medal at the 2015 International Wine & Spirits Competition, and 95 Points at the 2016 Ultimate Spirits Challenge.

The nose starts off with a background of nuttiness accompanied by smoldering moss and flamed orange peel. The peat leaps from the palate, expressing campfire notes, iodine, and roasted pistachios. With time, the smoldering moss on the nose evolves into burning embers and roasted plantains. The palate also transitions over time, moving towards significant earth notes, green herbs and increasing iodine towards the finish.