Learn more
Size375mL Proof92 (46% ABV) *Please note that the ABV of this bottle may vary
Aged for up to two years, this whiskey earned the Silver Medal at the 2012 San Francisco World Spirits Competition.
Notify me when this product is back in stock. 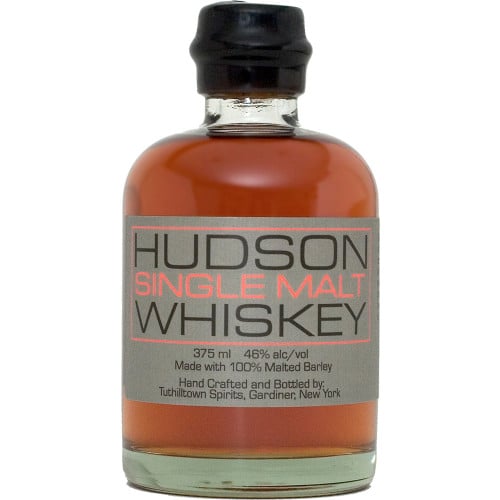 For nearly 220 years, the Tuthilltown Gristmill — located off Albany Post Road in Gardiner, New York — used waterpower to mill local grains into flour. In 2001. Ralph Erenzo acquired the property and together with a partner, converted one of the mill's granaries into a distillery. At the time, Erenzo had little experience distilling spirits. After purchasing a furnace from eBay and a German copper-pot still that arrived without instructions, Erenzo attempted to distill a batch of vodka using apple scraps from a nearby apple-slicing plant in the Hudson Valley.Soon thereafter, Tuthilltown Spirits began experimenting with whiskey. "Our first aged spirit was an experiment that turned out quite well indeed," says Erenzo. "And since we are a small batch shop, we can change direction overnight. We also realized early that whiskey was coming back, in particular the interest in straightforward aged spirits; people are just tired of the same old thing. And we copied no one." Hudson Single Malt Whiskey is distilled from 100% whole ground malted barley. Much like with Hudson Baby Bourbon, the grains are fermented for nearly a week before being distilled twice through Tuthilltown Spirits' 800-liter, hand-assembled German copper-pot still. After distillation, Hudson Single Malt is aged in custom-made Missouri white oak casks that have been heavily charred. In addition, the warehouse walls in which the barrels reside are lined with heaters, which are powered by water from the distillery's stills. As a result, when the stills are running, the warehouse becomes incredibly warm, causing the oak casks to expand and interact with the whiskey. Each night, when the stills are dormant and the temperature cooler, bass speakers, which have been placed throughout the warehouse, play very deep bass music. The bass vibrates the barrels, agitating the spirit and creating micro-expansions and contractions in the barrels themselves. This sonic aging process " unique in the industry " adds to the interaction of the wood and whiskey.

After a slumber of up to two years, each batch of Hudson Single Malt is brought to proof, before each bottle is filled, sealed and numbered by hand. Hudson Single Malt has an aroma of fresh oak, caramel and toffee that gives way to notes of vanilla, honey and malt on the palate. The finish is smooth and long, with notes of caramel, vanilla and a hint of spice. The whiskey earned the Silver Medal at the 2012 San Francisco World Spirits Competition.

"We're not making whiskey the 'traditional' way, as defined for 80 years by the big whiskey producers," says Erenzo. "We are making it the way their grandfathers made it. We do all the work, hands-on, from scratch. All of our product is handmade." Try a handmade whiskey today!

Aroma of fresh oak, caramel and toffee. Initial notes of vanilla, honey, and sweet malt play nicely and lead a smooth, long finish that has notes of caramel and a hint of spice.