Size750mL Proof100 (50% ABV)
A limited edition release of 2600 bottles, this American single malt is aged in Garryana, a unique indigenous oak native to the Pacific Northwest.
Notify me when this product is back in stock. 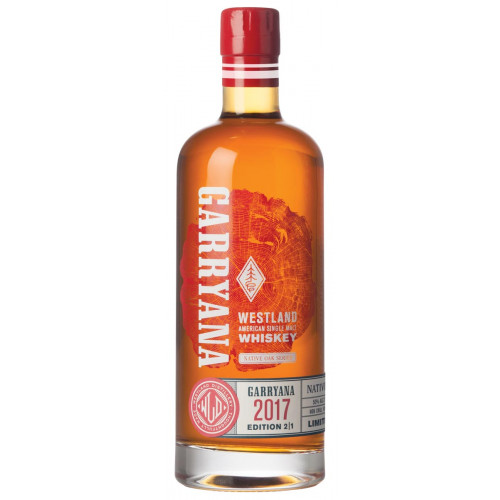 Garryana is the embodiment of provenance, “an expression of the Pacific Northwest—both its land and its culture—in whiskey” (producer). This limited edition series of bottlings explores the nature of the unique species of native oak, Quercus garryana (also known as Garry or Oregon oak), and its unique influence on the cornerstone elements of Westland’s distinctive house style of American single malt. This 2018 edition of Westland's single malt Garryana whiskey is comprised of 52% pale malt aged in 1st fill ex-bourbon Quercus alba, 27% Westland’s proprietary five malt aged in Virgin Quercus alba (new American oak), and 21% pale malt aged in Virgin Quercus garryana. A limited edition release of 2600 bottles!

On the nose are notes of clove, nutmeg, and honeycomb, followed by darker notes of mocha and wood smoke before opening up to candied ginger and dried tropical fruits. On the palate are Garry Oak’s signature flavors of molasses and BBQ smoke lead with notes of mouth-coating espresso, blueberry ice cream, and subtle citrus joining.