Learn more
Size750mL Proof92 (46% ABV) *Please note that the ABV of this bottle may vary
This Port Cask Finished Virginia-Highland Whisky is a culmination of Old World and New World whisky making, showcasing 100% malted barley whisky made on-site in Virginia married with whisky from Scotland and finished in port-style wine casks. 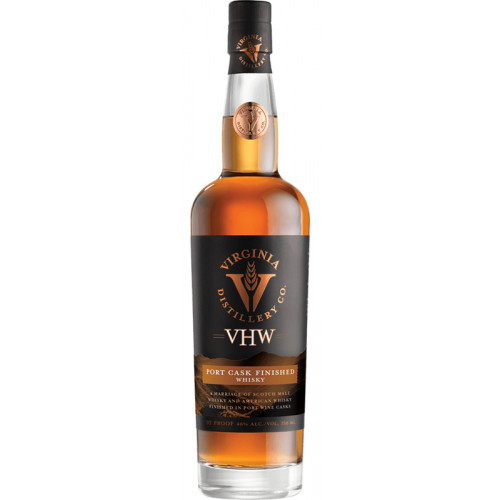 The late Dr. George G. Moore was a native Irishman, with an incredible passion for single malt whisky and his adopted home Virginia. His Virginia Distillery Company is a union of these two passions, brought to life in 2011. Today the distillery is looked after by, George's son, Gareth Moore and his wife, Maggie Moore, who have continued to preserve and cultivate George’s single malt dream.

Virginia Distillery Company is currently producing an American Single Malt on-site using malted barley from the U.S. and water from Virginia’s Blue Ridge Mountains. This distillery flagship is being aged in ex-bourbon, sherry and re-toasted wine casks. Virginia’s hot summers and cool winters significantly influence the aging cycle, imparting a distinctive character onto the whisky. This flagship will be released in three to six years’ from the time of casking, in 2019.

While this single malt matures, Virginia Distillery offers their Virginia-Highland Malt Whisky expression, distilled from 100% malted barley, and crafted from single malt whisky produced in the Scottish Highlands— a region known for producing bold and powerful single malts that are full-bodied, rich, textured, and characterized by a touch of smoke and fruit.

The whisky is then transported over 3,000 miles to the Virginia Distilling Company in Lovingston, Virginia where the Scotch is married with whisky made onsite in Virginia. This hybrid whisky is finished for several months in French oak casks that were previously used to mature a Virginia port-style wine. The French oak casks, which are sourced from a local Virginia winery, impart a copper-reddish hue to the whisky and contribute sweet, fruity notes.

Port Cask Finished Virginia-Highland Whisky has notes of dried fruit and raisins on the nose, along with vanilla and barrel spice. The palate has hints of toffee, cocoa and toasted oak with a soft finish. Enjoy it neat, with a cube or a splash of water or in your favorite specialty cocktail.

On the nose, dried fruit and raisins are evident, along with vanilla and barrel spice. The palate displays hints of toffee, cocoa and toasted oak with a soft finish.