Size750mL Proof80 (40% ABV)
Tullamore DEW's flagship Irish whiskey is a blend of grain, malt, and pot-still whiskey that is triple distilled and triple-cask matured in refill, ex-bourbon, and ex-sherry barrels. Bottled at 80 proof, the expression has garnered numerous awards over the years.
Notify me when this product is back in stock. 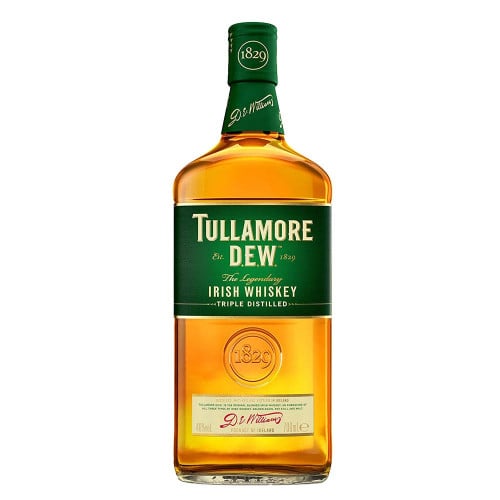 Smooth and gently complex, Tullamore DEW Original Irish Whiskey is a blend of 3 spirits, where the grain contributes the sweetness, malt the fruity notes, and pot-still the spice. It's triple-cask matured in refill barrels, ex-bourbon barrels, and ex-sherry butts before being bottled at 80 proof. Tullamore DEW's flagship whiskey has garnered plenty of awards over the years, including a Gold Medal at the International Spirits Challenge in 2020 as well as the World Whiskies Awards in 2019, to name a couple of the recent ones.

Grab a bottle of this famous Irish whiskey today!

The nose opens with honey and plenty of fruit notes including freshly cut apples, dried fruit, banana, citrus, and malt. These transfer onto the palate where they are joined by toffee, culminating in a smooth finish with a touch of wood and spice.