Size750mL Proof80 (40% ABV)
The Bushmills Original is a rich and smooth classic Irish blend of a single malt whiskey and a lighter grain whiskey, matured in bourbon and sherry casks. The brand’s signature expression is a versatile whiskey that can be sipped neat or mixed into your favorite cocktail.
Notify me when this product is back in stock. 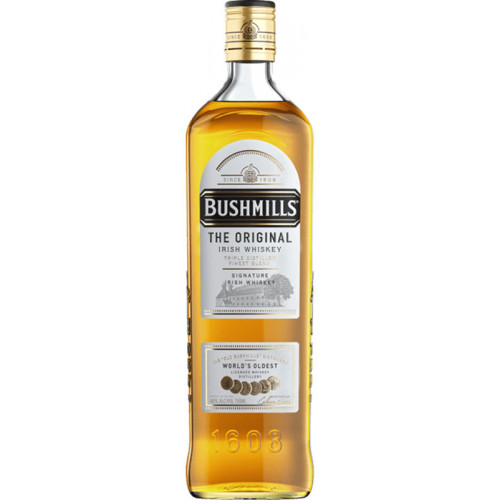 About Bushmills The Original Irish Whiskey

Bushmills is the seconds largest Irish whiskey distiller and the world's oldest licensed whiskey distillery, with its story starting over 400 years ago, in 1608, when King James I granted Sir Thomas Phillips, a local land owner, the license to distil in the area. The Old Bushmills Distillery Company was officially established in 1784 by Hugh Anderson. Remaining faithful to its mission of making the finest whiskey, the distillery successfully weathered the hardships of centuries. In the 1850s, when the Crown imposed a tax on distilling in Ireland through a tax on barley, this forever changed Irish whiskey, as almost every Irish whiskey distillery began substituting corn or other inferior grains for barley. However, Bushmills stuck to barley, and continued to make its single malt. In 1885, a disastrous fire destroyed the distillery, which was soon rebuild and the production was relaunched to meet soaring US demand. After the US Prohibition started in 1920 and brought the exports to a major market to a halt, the number of distilleries in Ireland shrunk, however Bushmills persisted on its course and was ready to send what was reportedly the biggest shipment of whiskey ever to leave an Irish port when the Eighteenth Amendment was repealed in 1933.

The distillery, located just a few miles from Ireland’s north coast, is closely connected to the village Bushmills, named for the mills along the River Bush. Generations of villagers have worked at the distillery and passed down the experience and craft that go into making the finest Irish whiskey. The Old Bushmills Distillery is an Irish icon, and its illustration is featured on the series of Bank of Ireland notes issued in 2008. Bushmills is currently owned by Jose Cuervo.

The Bushmills Original is a rich and smooth classic Irish blend of the distillery’s single malt whiskey and a lighter grain whiskey. Its recipe dates back to before Prohibition. The whiskey for the brand’s signature expression is triple distilled, and then matured in both bourbon and sherry casks, before being bottled at 80 proof.

A balanced and fruity nose is followed by fruitiness on the palate, with notes of vanilla, caramel, honey and oatmeal cookies. The finish is well balanced and sweet.