Be the first to review this product
A bold addition to the oldest Irish distillery, Red Bush is a well-rounded Irish whiskey blend with an intense bourbon finish. Great choice for bourbon beginners and more experienced drinkers, alike.
$15.99
Add to Wish List

More than 400 years later, Bushmills is still delighting its loyal fans with new offerings. The distillery weathered everything from a disastrous fire, the Prohibition and devastating grain taxes because of its uncompromising commitment to quality – even when other Irish whiskeys were forever changed due to a tax on barley, this legendary distillery continued distilling single malt whiskey in the traditional way, never substituting barley for corn or other inferior grains. Among its endless accolades, the distillery boasts the only Gold Medal for whiskey ever to be awarded at the Paris 1889 Expo.

Matured for 4 years in first-fill American white oak bourbon barrels, Bushmills Red Bush has an intense bourbon finish. A bold addition to the oldest Irish whiskey family, this blend of triple-distilled Irish single malt whiskey and fine Irish grain whiskey has been immediately adored for its signature smoothness and a well-rounded character. Whether you’re new to the Irish whiskey world or an experienced drinker, the balance of sweet, nutty and vanilla notes with distinct bourbon flavors provides a tasteful and authentic drinking experience. Best enjoyed chilled and neat.

Get your bottle from Ireland’s oldest distillery today!

The nose offers sweet and nutty notes. The palate develops a well-rounded character and balance between the sweet, vanilla notes and the distinct hints of bourbon. The finish is short and smooth. 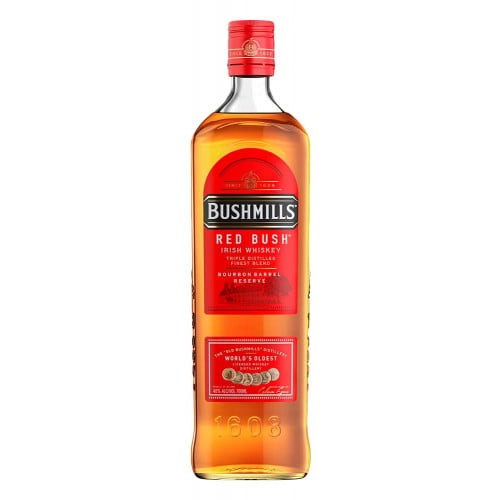