Size750mL Proof80 (40% ABV)
An Irish whiskey blend featuring a Single Grain and a higher than usual percentage of Single Malt and Single Pot Still whiskey. Aged in bourbon, marsala and sherry casks.
Notify me when this product is back in stock. 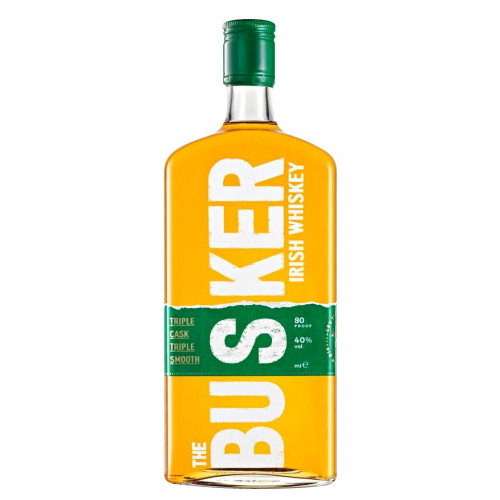 The Busker Triple Cask Triple Smooth expression is a premium whiskey blend featuring a Single Grain and a higher than usual percentage of Single Malt and Single Pot Still. As the name indicates, it’s matured and finished in three types of casks: bourbon casks, marsala casks and sherry casks. Bottled at 80 proof, this exceptionally smooth whiskey of a beautiful yellow gold color first seduces you with light aromas of tropical fruits and vanilla notes, developing a richer, darker palate with distinct notes of malt, sweet flavors and dark chocolate. Toffee fudge and cinnamon notes complement the rich body. The finish of this high-quality blend is balanced, mellow and sweet. Enjoy it however you want – neat, on the rocks or in a classic cocktail.

Beautiful light, yellow gold hue. Light nose with tropical fruits and vanilla notes. The palate is rich and darker with malty notes, sweet flavors and dark chocolate. Toffee fudge and cinnamon in the background. The finish is balanced, mellow and sweet.