Size750mL Proof80 (40% ABV)
Matured in four different types of casks, this whiskey was named the "Best Irish Whiskey of the Year" at the New York International Wine and Spirits Competition.
Notify me when this product is back in stock. 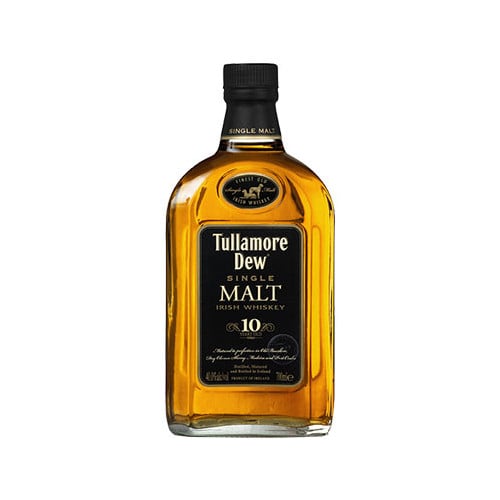 Tullamore DEW Single Malt Irish Whiskey is made exclusively from malted barley. Once the grains are harvested, they are milled and mashed with hot water before being fermented in wooden washbacks. During fermentation, the grains' sugars are converted into alcohol, creating a strong yet sour beer called wash. The wash is then triple distilled through three copper-pot stills: a wash still, a low wines still and a pot still. Through each distillation process, the alcohol content and flavors of the whiskey are intensified.

Tullamore DEW 10 Year Old Irish Whiskey has an aroma of pineapple and apricots, that gives way to bold notes of roasted nuts, caramel and berries on the palate. The finish is long and smooth, with notes of sherry balanced against a subtle, citrusy undertone.

Pick up a bottle of the best Irish whiskey today!

Aroma of pineapple and apricots, that gives way to bold notes of roasted nuts, caramel and berries on the palate. Finish is long and smooth, with notes of sherry balanced against a subtle, citrusy undertone.