Be the first to review this product
The second expression to be distilled at Teeling's new distillery and the first peated single malt to be distilled in Dublin, this unique Irish whiskey is aged in bourbon and Sauternes French wine casks.
$75.99
Add to Wish List

Teeling Blackpitts is a peated Irish whiskey ― the first of its kind to be distilled in Dublin, as well as the second whiskey to be distilled at Teeling's new distillery. It's a triple-distilled single malt that is crafted with peated barley from Glenesk in Speyside. It's the triple distillation that brings the phenol level down, making for a gentler smokiness than its Scottish counterparts. The expression is aged in a combination of ex-Bourbon and ex-Sauternes French wine casks, then bottled without chill filtration at 92 proof. The name is a reference to the Blackpitts area behind the distillery, which was famous for its abundance of malting houses.

The unique type of smokiness is of the BBQ kind with an additional clove note. Butterscotch and orange zest aromas balance it. The palate has honey, allspice, and applewood smoke, along with pears and grilled pineapple. The finish has more of that savory smoke, woodiness, and salted caramel. 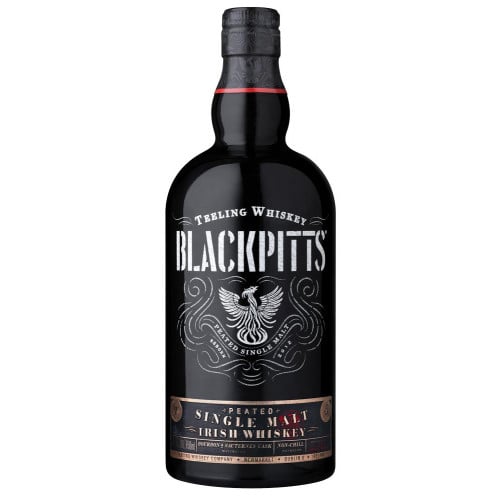